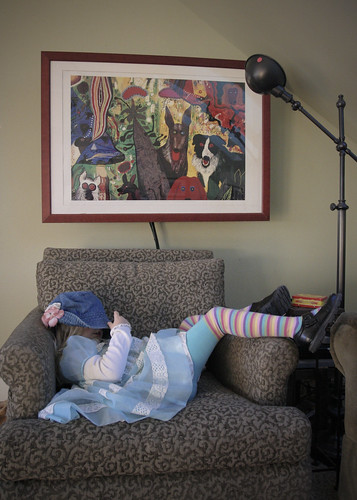 Pictured above is but a moment in a lengthy interpretive dance.  The lil’ monkey was doing a rendition of “My Favorite Things,” which holds closely, at least in its rhythms, to the Julie Andrews/Sound of Music version.  At this point she was singing “When I’m feeeeeeeling saaaaaad.”  “When the dog bites” and  “bee stings” warranted a clump on the floor.  She rose and swirled around when she got to “I simply remember my favorite things, and then I don’t feel sooooooooo bad.”

Life’s ordinary rhythms are returning after the Prop 8 battle and vote, but they don’t crowd out the heaviness that has characterized its aftermath (at least for me).  They just kind of sidle up to it, and keep it company.

I’m still trying to find and filter the words to make sense of it all, and fall silent (or give up trying) more often than not.  Like with all aftermaths, my personal calculus is that one needs as much time (as many months, years) adjusting to the new state as one had in the previous one.

Don’t know how to count out the Pre-/Post-8 healing process.  I’ve been myself all my life, and aware of being off, wrong, out of step, gender-wise and later object of my affection-wise, since as long as those awarenesses arrive.  But the six months’ ride, May to November this year, does stand alone in heat and intensity.  May 2009 will give me six months of readjustment (just in the nick of time: that’s the earliest possible arrival of state Supreme Court decision on the matter).

Meanwhile, the moodiness of Coltrane’s syncopated waltz carries the day.