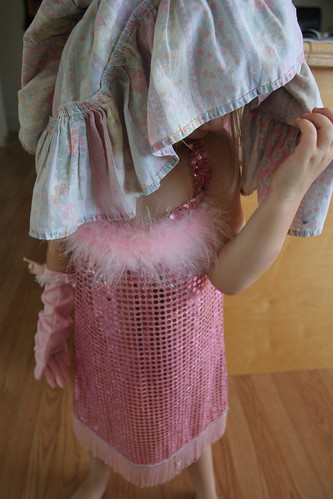 [Ed. note: Sadly, my usually pinched time is getting pinched-er with some upcoming work deadlines, and it will stay that way for a while.  I’ve had to punt to next week my reflective second part to the whole back-to-school transition dealie that I thought I’d post here today.  It deserves more massage time than I’ve been able to give it.  Instead, here: have some breezy fun and a buncha YouTube links.]

Now that Fiddler on the Roof is in rehearsals at the beloved’s youth theater co., the lil’ monkey is full-on in character, at least 50% of the day.  What character, you might ask?  Well!  Depending on the day, it’s either Tzeitel or Bielke, the eldest and youngest of Tevye’s daughters.  The lil’ peanut, in case anyone wants to know, is Mendel, the rabbi’s son.  The beloved is Golde.  And yes, I am proud to say, I am Tevye.

For more hours of the day than the beloved can bear, our daughter implores me to speak in my fake-o Russian accent.   I accommodate the request to the best of my abilities, which are meager, since I don’t actually speak more than one sentence of Russian, nor do I know the proper inflections to indicate  Jewish milkman in the turn-of-the-century tsarist period, if he were trying to speak in English.  But, you know, one tries.

So far it’s been a big hit, my substituting “The Baba!” when everyone sings “The Papa!” in “Tradition.” And since that works so well, I substitute “The Baba!” for “The Mama!” when it rolls around in the next verse.  As a both/and type of gal, this sort of stuff comes naturally to me.  The kids eat it up, too.

Want to be reminded of the tune? Have a coupla minutes to while away?  Listen to  Alfred Molina, who knocks Tevye out of the proverbial ballpark. Or should I say the  shtetl. Traditionalists —  no pun intended — might want Topol’s version in the film (sorry, couldn’t find Zero Mostel “Tradition” footage on YouTube).  For the adventuresome, there is this chap, whose name I don’t know.  Of course I don’t speak more than three words of Japanese (but hey! I sure used them in my 23 hrs in Tokyo that one time!). Yet and still, nothing, not even a language barrier could diminish the umph of the song, performed here with a zest recognizable in any language.  But wait!  My current favorite version: the young folks of the Ozalis Harmonica Ensemble rendering the whole musical in a gorgeous metallic medley, on four different sized harmonicas.  Darn tootin‘ they were prizewinners in the 6th Asia Pacific Harmonica Festival.  It will be seven minutes and twenty-two seconds you will not regret.