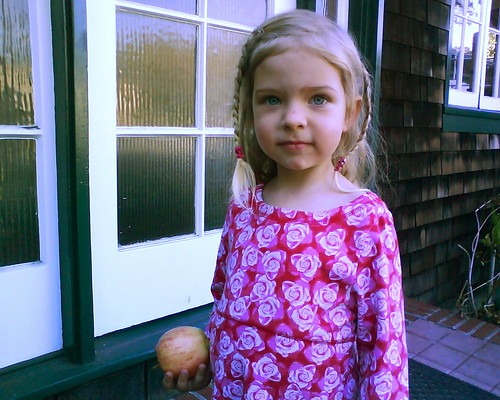 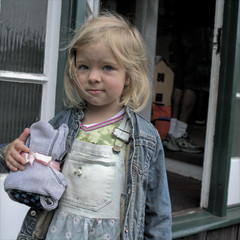 …I give you, lil’ monkey’s second first day of school. See the image at right, from yesterday’s post, for a glimpse of the stalwart toughie, her first first day.

Note above, by stark contrast, the relaxed demeanor on this year’s model.  What a difference a year of loving community-building can do.

Note the lack of out-thrust lower lip.  The placidity in the face, the furrow-free brow.  The apple in the hand, which Baba told her it was customary to bring to your teacher the first day of school.  In some fifteen years of active teaching and teaching-esque duty, I think I might have received enough apples to make one very feeble compote.  Or maybe enough to feed the lil’ monkey on a binge. Thus my staunch, pro-apple stance.

Of course as we were headed to school, she asks, “Why is it traditional to give an apple to your teacher?”

As is my custom, I eagerly start to dig myself into a nice big hole.  “Well, lambchop, it symbolizes knowledge.”

“But why does it symbolize knowledge?”

“Well, there’s all sorts of malarkey about Adam and Eve and the tree of knowledge and how it was all her fault, and –”

The beloved, up until this point calm in the passenger seat, elbows her way in, before it all goes even further to pot.  “That’s enough, Baba.  It’s just a tradition, and that’s all.”

“Listen to your mother, dear,” I say.

Brevity, what a lark.

After we deliver her into the school, the little sophisticate barely registers our leaving.  Out at the curb, the first of the newbies is arriving.    We smile and wave.  The parents, poised to pluck their little one from the child seat in the back of the car, manage brave smiles back.

“It hurts you more than it hurts them!  Just get a paper bag and breathe slowly into it!” we call out cheerily, as we wave to them.  Which is partially bunk, but it’s also true, too.   Me, I keep a paper bag handy at all times.

10 thoughts on “And by point of contrast”