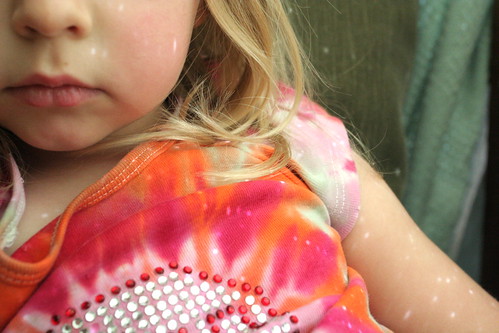 We’re cuddled under a make-shift tent on the couch, while her brother naps. I’ve draped a knit blanket overhead, and it filters the sunlight into tiny granules that dance whenever we move the blanket. We are listening to the original cast recording Sondheim’s Into the Woods, a masterful retelling of fairy tales, a story about innocence lost and the fallacy of “happy ever after.” And at the same time, I think, about hope’s inextinguishable return. In spite of it all.

I watch her as she listens and consider myself more fortunate now than I have ever been in my life. To have moments such as these in the first place, and to know that their preciousness is rarely lost on me, in the second.

Last night her mama closed a smash-hit run of this extremely challenging show with her youth musical theater company.  I imagine the waves of bittersweet washing the proud parents in the audience, as they watch their just-graduated-from-high-school, about-to-move-away-to-college, (now-no-longer) children facing them, singing the finale to this musical. At least half a dozen such parents were among the 300 in the house. One, whose only son is off to Tisch School of the Arts at NYU next month, wept (with joy, with pride, with sorrow, with the sweetness of it all) every night of the run as she watched from the back of the house. Who’s to blame her.

When the beloved hugged her after the show, the woman and her husband said again what they’ve told her before: “It goes so fast.”

Meanwhile, I cling to stories like the one the lil’ monkey told me before going to sleep last night, about the fairies that only she and her brother see.  I’ll believe in them, as long as she does.

Below, the Broadway Woods finale, featuring “Children Will Listen,” for Sondheim lovers who have three to five minutes and a hanky or two to spare.  A minute and a half in is when Bernadette Peters takes the helm with the song. Three minutes in it blends into the finale, which, one supposes merely for the sake of relief, is not nearly so heart-tuggy.

For those want to follow along with the lyrics: