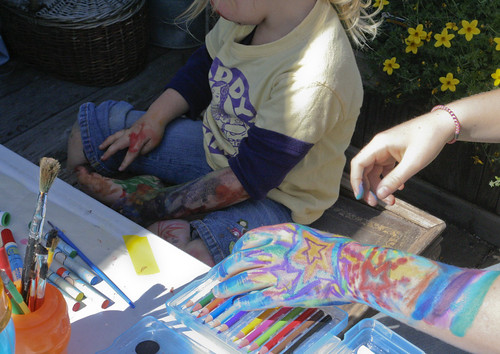 Who’s having more fun: kid, or babysitter? You be the judge.

One of the lil’ monkey’s two childcare-for-voice lessons caregivers cared for her for the last time today. Most likely. She’s a recently graduated high school senior, virtually matriculated college freshman. She’s off to Boston any day now.

They had spent the morning together at a nearby tot lot, playing imaginative games as they often had. The younger brother was along for the ride, having become old enough to be manageable. The three came back to the house, the kids smudge-filled and all smiles. The lil’ peanut went down for a nap, and the two gals, one little and one big, read fairy tales on our couch for a good long while, as they often had. Then it was time for our daughter’s “biggirl” friend to go.

I came out from where I had been working, and asked to take a photograph of the two of them. The lil’ monkey said Nooooooooo. For which reason I don’t know: arbitrary assertion of a right, just to remember that it’s there? Or instinctive concern that the moment would tap into a well of sadness about the fact that her biggirl friend was about leave? I respect both, and didn’t press the matter.

Read moreJust a moment or two