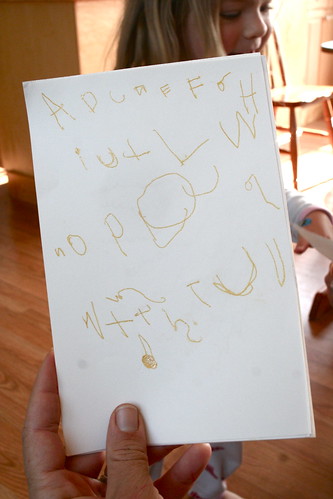 Stop the presses our daughter’s a frickin’ genius! (Bet you never heard that out of a proud parent’s mouth.)

And we aren’t the only ones freaking out about it. I think she is, too. Just got a call from the preschool that she is on a hunger fast, and won’t leave the couch, where she has surrounded herself with books.

Why? Behold Fig. A, at right: her rendition of the ALPHABET. (A transcribed Fig. B here, for those of you who, due to your not being our daughter’s parent, might not be able to make the letters out .) It was rendered this morning – are you sitting down? – at about the rate of speed it took her to SING the alphabet. And not sing it like she was on Quaaludes, but rather sing it at a fairly decent clip. You know, like about at the pace that your ordinary three and-a-half year-old would sing it. Yes, your ordinary THREE AND A HALF YEAR OLD. Which means, I’m thinking, she’s not so ordinary. (Or could it be that that she’s ordinary, and our love and pride is, too?  Dang, what a ride.)

I’m also now beginning to think that this roiling sea of thought inside her brain, this slo-mo mental super nova, just might be part of what’s been behind her, shall we call them, behavioral tics latelty.

It’s only a theory, but it is mine. About which (behavioral tics), watch this space on Monday. Hint: the appropriate soundtrack would be Mike Oldfield’s Tubular Bells, from The Exorcist.

10 thoughts on “Stop the presses!”