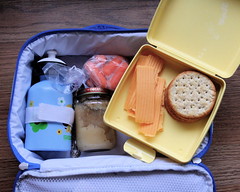 …of which she’ll eat, like, ten percent. My money’s on the apple sauce, maybe a nibble of cheese (picture a “Honey I Shrunk the Mouse”â€“sized rodent), maybe part of one cracker, and if it’s a good day, she opened the carrot bag.

Goddess only knows what regulates her appetite. The beloved and I have given up trying to understand the erratic little vehicle that is her taste, and instead attempt merely to steer it in generally healthy directions. We offer her balanced options, and try to remember what a wise friend once told us: over the course of a week or two, she’ll have checked in at all the major food groups for a visit.

We’re beginning to accept that unless we strap her to her chair and ram it into her, we’re just not going to see all the major food groups get into her body in one day. We remain unwilling to dangle a “treat” at the other end of the healthy food, even if it is a humane alternative to bondage at the dinner table. We are fatiguing under the strain, over the long haul, of not using an inducement (so convenient! so sure-fire!), but we continue to hold fast. We want to do our little part to reduce the aura of specialness around sugar, a heavyweight drug right up there with caffeine and TV, neither of which we’re looking to use as rewards, either. Ask me in another year, though, and I may have to concede that we have a whole stock of Wonka bars in the pantry that are pressed into use nightly as bribes for her to finish her brussels sprouts.

Meanwhile, I do think there are some noticable benefits to our not being dominatrices about her eating everything we dish her up. So far, she hasn’t lost the ability to tune into her natural feeling of “fullness.” Because we don’t insist she finish her plate of food at home (I comfort myself by thinking), she doesn’t feel compelled to do so anywhere else, either. Time and again, she is the only kiddle at the preschool to push away from the table with a 3/4 eaten cupcake. ‘Cause she’s just full, that’s all. And it’s not like the sugar food has been reinforced as the fun stuff that’s a reward. So far, I’ll take that as a tiny win.

Then again, it could also be that she simply doesn’t have the taste for it. Her brother’s eating habits are already very clearly taste driven, in a mega-carnivorous direction. I fear for us if we stop to get out and stretch on any drive through cattle country. I picture him now, trotting through the field towards the biggest heifer he can find, bib tucked into his little shirt and blunt little plastic fork and knife in each hand.

I rummage around RookieMoms for rays of light to guide me. This site (which also has a blog), is done by two infinitely inventive local gals, one of whom was in the beloved’s “mom’s group.” (We took to calling that group her “Hetero Mom’s Group,” by the way, to distinguish it from the posse of lesbo parents we’ve met with ever since we found ourselves in the same queer gal childbirth education class.) Funny thing about Berkeley, there were three lesbo mums in that “hetero” mom’s group, out of a total of I think nine gals. So “hetero” was a bit of a misnomer. Or it was hetero as in heterogenous, or mixed: both hetero and lesbo mums. But here I’m getting us all tangled up in terminology and really what I wanted to do was lament about the pressing (if Sisyphusian) challenge of preparing my daughter a tempting lunch box.

Some time back, Rookie Moms had a post about a woman who made lunchboxes suitable for display in the Metropolitan Museum of Art, or perhaps even the Smithsonian. The idea is that the kids respond positively to the visual splendor, about which I have no doubt. I would. But I have fruitlessly (no pun intended) tried to find the post at RM. Instead, I get sidetracked onto various other posts about how to fix food for your kiddles that they just might eat. For instance Snacks For Toddlers. I’m kind of hoping I don’t find the Kid’s Lunch Box as Work of Art post, though, because I worry that every morning thereafter, when I stare at the intimidating blank canvas of our daughter’s lunchbox, I will wither under the pressure. I could resort to copying the masters. Maybe some of my favorite SF Museum of Modern Art pieces. A Jackson Pollack thing, maybe, with catsup and pesto splattered all over a backdrop of cheese? Or a take-off on Robert Rauschenberg’s “White Painting” thing, only with yogurt.

Needless to say, I’ve asked her directly. “Sweetie, is there anything on God’s Green Earth you might be tempted to eat, if I put it in your lunch box?” That just got a little chuckle out of her.

Then I tried a slightly more helpful question. “When you’re at preschool, and you see the other kids eating things, is there anything WHATSOEVER that looks good to you?” Of course she had been eyeballing the vittles in the box of the Big Dog at school, a personage she pretty much ID’ed in the first few weeks. Let’s call her “Canis Major” (not her real name).

I’m all excited: hope is on the horizon! “What does Canis Major eat, sweetie?”

Insert your favorite game show “Loser!” buzzer sound here. Not like I don’t love sushi like the next urban sophisticate. I just can’t assemble it. Or let’s say, I’m not sure how I can fit sushi assemblage lessons into my busy schedule just yet.

In the spirit of one of the hundred-plus bright ideas I’m getting from the LD Reader Survey, I will end this lament with a question, to better foster some back n’ forth with you all bright lights (even though I know the gal who proposed more dialog was thinking Bigger Thoughts than just eating habits). Yet and still. If you have known kids who are Air Ferns like the lil’ monkey, how in the Sam Hill did/do you get them to eat anything?

22 thoughts on “Yet another yummy lunch…”