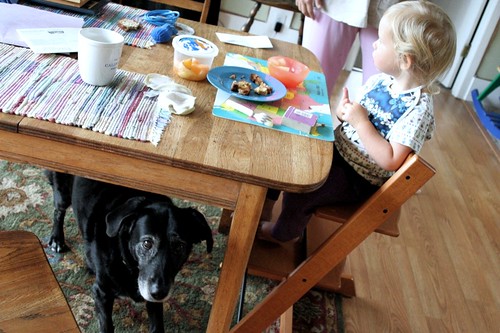 You’ll never know how much baby-generated dinner table detritus your dog is taking care of until she’s gone. Though you’ll probably know how much you love her before then. 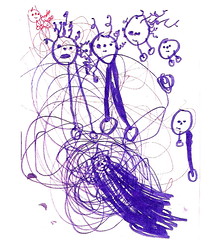 I miss her every single day.

The lil’ monkey’s family portraits still include pictures of her along with everyone else. Take this one, at right, for instance. A product of just a couple of weeks back. If memory serves, we have, from left to right, Mrs. Mooney, the cat (the afterthought, in red), Baba, Mama, the lil’ monkey herself, her little brother, and lower down, Maxi, now of the spirit world. Maxi, the most gentle emissary the animal world could have sent. Our daughter’s earliest, most favorite object of fascination. If her death serves no nobler purpose than to introduce the concept to our daughter in a way that tugs at her heart but does not break it, well then.

Tens of thousands of hearts, and a world’s worth of trust is being broken in the other, far bleaker anniversary news: five years of the Iraq war today. Not like it’s a surprise to any of you astute readers. I’ll just toss in a link to the 5 Years Too Many local actions page, in case you’d like to join them on the occasion, and this detailed piece in The Nation by UMass economists Robert Pollin and Heidi Garrett-Peltier, “The Wages of Peace.”

Every $1 billion spent on a combination of education, healthcare, energy conservation and infrastructure investments creates between 50 and 100 percent more jobs than the same money going to Iraq. Taking the 2007 Iraq budget of $138 billion, this means that upward of 1 million jobs were lost because the Bush Administration chose the Iraq sinkhole over public investment.

In case you want numbers to back up your button that says “It’s the WAR ECONOMY, stupid!”

3 thoughts on “She lived to mooch; she mooched to live”