The girlie must have been watching Britney Spears on YouTube behind my back. I give you Exhibit A, below, right: what the lil’ monkey hath wrought, aided and abetted by her artsy crafty scissors. Yes, that’s her hair. Correction, was her hair.

I didn’t freak out after her first bout with the shears. That is, after I knew what had happened. I’d been distracted by feeding her brother, and went to check in on her at her “art table,” where a suspicious quiet had fallen. I asked her how she was doing, and lovingly began to pet her head, when her hair began to come out in clumps in my hands.

Quite naturally I was spooked. “Yegods! Cancer?!! Chemical attack?!! Homespun curse from a grudge-bearing preschool enemy?!! Dammit, girl, would it kill you to share the Polly Pocket Dolls?!! Look what happens!!” Then I saw her scissors on her art table, and some tell-tale evidence in the way of yet more hair.

I tried to calm the histrionics. I mean, I like to see her taking posession of her body. I like to see her taking a little initiative. Taking maybe a half an inch off here and there, you know, in a nice blended line, that sets off her chin. On General Principal I told her I was sad that she had cut off some of her hair, since it was my understanding that she was planning to grow it Rapunzel-length. Or, failing that, as long as one of her special cousins, who graduated from preschool with enviably waist-length hair.

To which I had to admit, “You’ve got a point there.” I ran aground, yet again, on the rocky shoals that separate a healthly respect for youthful self-determination from reasonable parental control.

After a perhaps a bit too long of a pause, I came back with a convincing retort: “But still.” I thought a moment longer. Then: “This is one of those situations where we invoke the ‘I’m the Baba and you’re not’ rule.”

She stared at me a moment, and went on to her next creative endeavor. I put shears back away, out of her brother’s reach, and kept a watchful eye on her for the rest of the afternoon. The beloved didn’t even notice the slight change in ‘do until I pointed it out.

It was the second bout that got me all up in arms. Days later she struck again, and this time the results were not so subtle. She went from moppet with mullet to looking like she had been mugged by Cyndi Lauper. More to the point, she looked like her Baba just lets her traipse around the house, doing as she pleases, following her every impulse. With scissors. We can’t have everyone else knowing that. So this time I confiscated the scissors, and we scheduled her first pro haircut.

The woman there was as genial as could be. Internally, I was stumped: has she seen two-gal parent teams come in before? And learned from experience that the lesbians 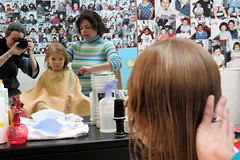 The whole affair was fascinating to the lil’ monkey. About as much so as her first visit to the dentist, and no more traumatic. Like at the dentist’s, she was sitting in her very own BigGirl chair, subject to the detailed and thoughtful ministrations of a grown-up stranger. She believed us that it wouldn’t hurt, so the rest of it was just a big adventure.

When she slithered off the barber’s chair, she beamed, knowing she’d made it through another rite of passage en route to BigGirl. She promptly gave her mannish lesbian parent a big, fat, long, giggly hug. Little moments like these take on a wee commercial feel for me, like: See? And the little cuties love me just like they would any other mother with a bunch of long hair and girlie accessories. Not like anyone was necessarily even surprised. But each foray deeper into heterosexual normalcy, with the kids, feels like a rite of passage for me, too.

Like many mannish lesbians (and Others of any kind), I’d found a way to proactively circumscribe my movements, ideally limiting myself to places where I would not be regarded as, oh, you know, a threat greater than terrorism.* I take a deep breath and steel myself when I have no choice but to go where (I worry) few queers have gone before. And at least in my head, this parent thing brings me to more of those places more often than before. Which I’m sure has been a productive thing, both for my fitful faith in human nature, and for strangers in the World At Large, laying in wait to confirm what their insides really wanted to know, which is that love is a good thing, no matter who’s doing the loving and who’s being loved.

So far, I’ve encountered no face-to-face ickiness in front of the kids. I have time to forumulate the best “teaching moment” response, if and when I catch hell from a hate-mongerer in their presence. (I’m thinking it’ll be simple: Love the spitter; hate the spit. It’ll feel less simple if they’re the target of the spittle. But we’ll burn that bridge when we get to it.)

Meanwhile, we have a kid’s haircutter we’re happy with. And the lil’ monkey’s earned back her right to scissors use, under strict supervision.

I think I’ve got her under control now. 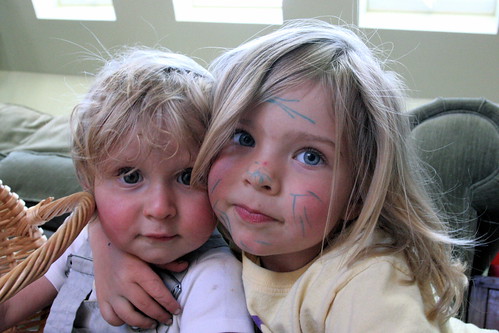