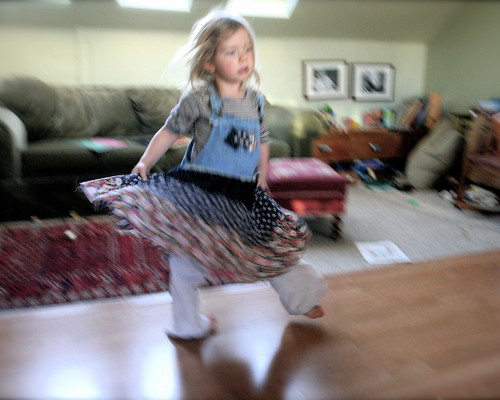 Above: The lil’ monkey dances not to Bizet this time, but to Jesca Hoop (Baba needs to shake her tailfeathers sometimes).

Girls can play any kind of music they want

In empowering girls to recognize, understand,
and respond to discrimination

‘Girls Rock’ is more than just a slogan

So says the Girls Rock Camp Allliance, an “international coalition of organizations whose shared mission is to empower girls and women using the tools of music education to foster self-esteem and confidence.” If you read any lesbian blogs that run ads, you’ll have likely already seen the ad for Girls Rock!, the documentary about the Rock ‘n Roll Camp for Girls in Portland. The film opens in Seattle, Portland, San Francisco, Berkeley, Los Angeles, Chicago, and New York this upcoming weekend.

Bookings in tons of other places follow in the coming weeks. If you live in any of these cities and you either were a girl, or know one, you ought to try to get your arse to the screening. Events surround each of the area screenings, so check those out too. Here’s a bit more about the film:

The Rock ‘n’ Roll Camp for Girls is a place where 8-18 year olds come from all over the country to learn Rock DIY-style–forming bands, writing songs and building community, and â€œGirls Rock!â€ is the movie about their journey.

The primary subjects of â€œGirls Rock!â€ are Laura, an articulate adopted Korean obsessed with death metal; Misty, who is emerging from a life of meth-addiction, homelessness and gang activity; Palace, a sweet-seeming 8-year-old with a heavy metal sneer, and Amelia, who’s writing a 14-song cycle about her dog Pippi. Forming bands, writing songs and playing a gig in one week, these girls and the rest of the camp engage in an experiment in empowerment that will leave no-one unchanged.

In meeting these four children, the filmmakers discovered what many books and studies have already describedâ€”girls are struggling with a bewildering and heartbreaking array of challenges to their self-image. Everything from eating disorders to drugs to sexual harassment have made girlhood a virtual battlefield. The filmmakers were happy to find in the camp a place where, in the words of former Camp Assistant Director Jen Agosta, “it is 100% ok to be exactly who you are.” What happens to the girls as they are given a temporary reprieve from being sexualized, analyzed and pressured to conform, is truly exhilarating. The act of picking up a guitar and making noise becomes a truly revolutionary act.

Now here’s a link to Girls Rock camps. If they’re still running them in another five years, we are so shipping the lil’ monkey off, no questions asked.