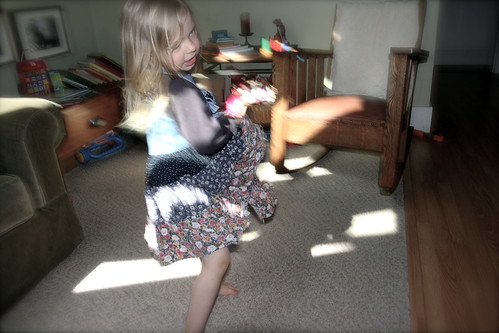 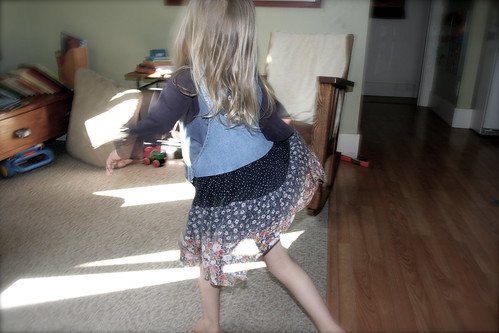 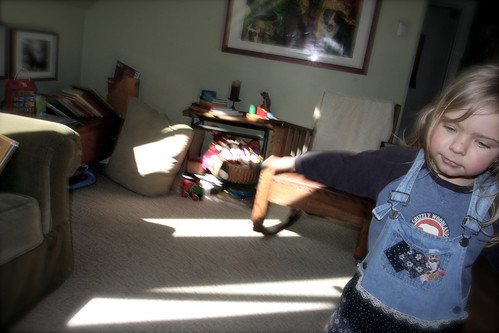 Last weekend we heard the Metropolitan Opera’s Saturday radio broadcast of Bizet’s ever-popular opera as I was making blueberry pancakes, and the lil’ monkey was transfixed. The Met broadcast was something my mother used to listen to long ago when she was young. She used to do her ironing to it. For this reason alone — that I picture my mother, a young woman, in an apartment about a half-mile north of here, humming under her breath as she pressed the wrinkles out of the very few, likely very worn dresses she owned — for this reason alone, I have a soft spot in my heart for the Saturday Met broadcast. While she’s not here when I listen, she’s still here, somehow.

All the lil’ monkey needed to do was give one good listen to Carmen and Into The Woods, her mom’s upcoming summer youth music theater production, was decisively unseated (which itself had unseated Oliver!, which had unseated Amahl and the Night Visitors, I must admit, with some assistance from Baba who, while she loves Amahl et al., was nearing the edge of her tolerance).

Like so many kids her age, our daughter is a serial monogamist, musically speaking. And she does give each piece its due, if listening to it in its entirety mutliple times a day counts (both home and car need to be stocked). And then play-acting scenes from it. And then insisting she actually is one of the characters, and insisting that you be another. For a week, minimum, more like two or three. No, really.

How we’ll play-act any bona fide opera is a bit of a sticky wicket. I can’t imagine the opera (aside from Amahl, and maybe Humperdink’s Hansel and Gretel) that doesn’t dish out heaping helpings of sado-masochism and female self-destruction in one form or another. Okay so maybe that’s an eensy exaggeration. But let’s take Carmen, for instance. How are we going to euphemise this plot? Um, trampy ho cigarette factory worker sleeps around, brags about it, lures some soldier guy, then dumps him to get with some bullfighter. She then gets a Tarot reading and resigns herself to her inevitable fate as homicide victim. Cheery, eh?

Instead, when the lil’ monkey asks “What’s happening now?” we’re all, “He wants to be her friend.” Or, “She’s saying how fun it is to have lots of friends.” Like that. I would welcome a G-rated version of opera plots, so that we could play her whatever she wanted from whatever canon she’d like. So long as it was in a language other than English, and we could go on lying to her about what true angst is behind the beautiful words being sung. Since lord knows she has plenty of time to learn that you really appreciate the beauty only after you’ve really known the angst.

*That would be a little advance PR for Girls Rock, (about which more next week), which is enjoying a Bay Area (and Los Angeles, New York, and Porland) debut this upcoming weekend

8 thoughts on “Love is a rebellious bird”