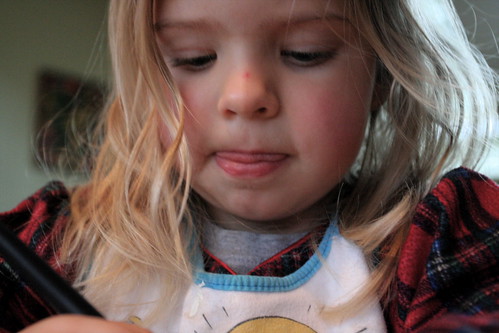 This afternoon, while listening to Gian Carlo Menotti’s Amahl and the Night Visitors for the seven hundred and twenty-eighth time since Christmas, the lil’ monkey drew a picture. I am noting the obvious when I say that she, like her mother, and her mother’s entire family, is an Amahl and the Night Visitors FREAK. (Anyone not familiar with this delightful holiday operetta can watch the entire historic 1951 telecast of it thanks to the miracle of YouTube — it’s a one act, 54 minute video, including the composer’s introduction. More fun facts about the operetta can be found here on Wikipedia’s entry.) 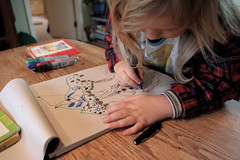 At this point the girlie has already got half the lyrics memorized, and for days on end has only answered to the name “Kaspar” (one of the three kings in the opera). I’m sure what egged this on was that the beloved (at the lil’ monkey’s behest) told the whole story, and then sang all the parts to all the songs (baritone, straight tone boy soprano, and mezzo) as we drove down out of the mountains after our holiday vacation. Sure beats “Ninety-nine Bottles of Milk on the Wall” for two and a half hours. At the end of the rendition, our girlie was chanting “More opera! More opera!” At which point we gave each other that contented “Our work here is done” look.

I should also note that earlier today, she had the benefit of several hours’ time with her Rock Star Babysitter/Special Friend, a high school gal who’s a voice student of the beloved and a regular in her youth musical theater productions. This is the second musical theater gal who’s done some babysitting-for-voice-lessons bartering, and we neither of us have the heart to tell our daughter that these unbearably cool, beautiful, perfect, attentive, thoughtful young women are not simply floating into her life on gosssamer wings, to be her Special Friend. Even though I’m pretty sure it feels that way to her. 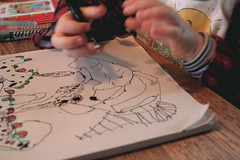 They were reading fairy tales, one after another, from a book my sister had given the girlie. Finally, with a shift in delivery noticable only to the most discerning ear, in the middle of the umpteenth tale the Rock Star Babysitter/Special Friend began to deviate from the narrative and imbue the princess witih feminist self-posession, a refreshing disinterest in the prince (or being saved by him), and an intriguing interest in gals.* All in the same sing-song, tale-telling tone she had been reading with. The finesse. I am sold on using theater artists as babysitters. If only we could afford to pay her a bonus on top of the barter thing.

But so. With this multi-media soup sloshing around in her head — one part opera playing on the stereo, one part fairy tale amalgam floating in her recent memory — this is what the lil’ monkey narrated as she drew: 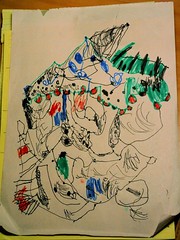 It’s for two year-olds and three-year olds. It’s not scary at all.

Scary movies are for older kids.

Tomorrow I want to put on my outside clothes and show this drawing to Sally and Mary ’cause they will LOVE it. They have seen this movie a HUNDRED TIMES.

I think this is where the Giant lives in Jack and the Beanstalk. This is what his house looks like.

I want to show everyone in the town. ‘Cause they will be AMAZED.

At which point she set down her pen, looked admiringly at her handiwork, and fell to listening to the last song in the opera.

Of course the townspeople will have to get in line after Baba, whose amazement at what goes on inside this little person’s head will NEVER CEASE.

* I’m happy to report that the thought to revise classic fairy tales has already occured to the lil’ monkey: a month or so back, she was building a set of wooden block stairs to a tiny blond doll, perched atop a pile of blocks. When the beloved asked her what she was doing, she said that Rapunzel had gone to the barber’s and had her hair cut off, so now she needed the stairs to get out of the tower. Sensible little bugger.