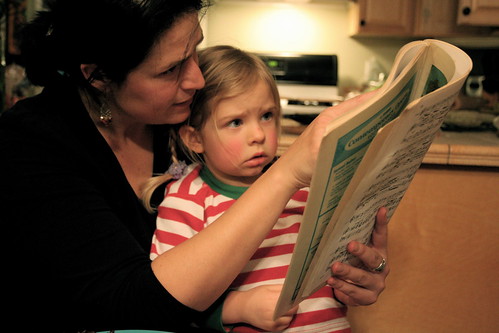 She’ll be off book for the entire Amahl part in another day or two. All the other parts, she still has some holes. I do think she’ll be ready to work as a prompter for the show for the upcoming season, should anyone produce it locally. ‘Course there are those pesky child labor laws. Could put a fly in the ointment. And she’s probably too short to pass off as sixteen.

Could be worse. Could be Phantom of the Opera. (They paid me to say that. The inlaws revile them some Andrew Lloyd Weber. Can you spell t-h-e-a-t-e-r – s-n-o-b-s?)

Also this post could be worse. I could have subjected you to video of our baby monitor, piping in to us her entire operetta-long medley, which she sang to her stuffed animals before going to sleep last night. Yes, I did videotape it. You know, to keep on hand if we want to use it for part of her earlybird application to Juilliard.