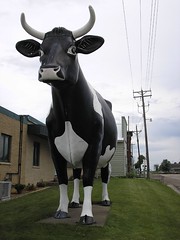 It is time now to speak of the COW which our girlie had a week or two back. It was a full-blown, veins popping out of her neck, two-tone heterodyne scream-filled, wee fists wailing on inanimate objects, spittle coming out with bursts of speech, fifteen-minute-long COW. A COW of such generous proportions that I was half expecting her head to spin â€˜round 360 degrees and spew split pea soup, Ã  la Linda Blair in The Exorcist. The little guy would have been alarmed, Iâ€™m sure, but Iâ€™d have just ducked and covered his head.

Everyone whoâ€™s tended a toddler knows whereof I speak, to one degree or another. And we just got a peek at tantrum in the first degree. Even if youâ€™ve conveniently forgotten these concentrated hits of uncut, unregulated emotion, I assure you your kid did something along these lines. Heck, we all did something along these lines, back when we were hacking our way through the underbrush of our as-yet untamed prefrontal cortexes, or what have you. You know, back in the frontier days, when the still-clumsy frontal lobe (reason! self control!) was trying to get a leg up on the fully-intact, robust amygdala (fight! flight!).

The lilâ€™ monkeyâ€™s COW began with the flip of a switch. (Hereâ€™s how I picture the switch, by the way.) No warm-up, no warning. Mama had to leave to go to work â€“ a factoid which does not always rattle, and which continues to be true, week in and week out. We had even amply anticipated it â€“ as we always do any notable transition in the kiddlesâ€™ realities. The good-bye was cheery, but when the door shut behind Mama, our otherwise calm and recognizable toddler went mental. Instantaneously wanted Mama NOT to go to work, wanted her to come back RRIGHT NOW, etc. The little brother was in my arms, and I had no choice but to keep holding him, since he was sick, and would commence to wail whenever I attempted to deposit him anywhere safe. Even if he could survive his own wailing for the length of time it would take us to get through the tantrum, I wasnâ€™t sure I could.

His sister began to rush the door and rattle at the handle, conveniently undermining her effectiveness by announcing just what she was about to do (e.g., â€œIâ€™m gonna go out this door and go get her RRIGHT NOW!â€). Later she will be all wily and concealing, like a cat. But right now sheâ€™s a dog: every feeling on display, no subterfuge. Allâ€™s I could do was position myself in some way as to keep her from pawing or chewing her way out. And then, shielding her little brother from whatever flailing limbs came in our general direction, I channeled Hal in 2001: A Space Odyssey : â€œIâ€™m sorry Dave, Iâ€™m afraid I canâ€™t do that.â€*

To my amazement, she remained herself at some essential level throughout the whole fit. She wanted Mama â€œRight this very INSTANT!â€ I have no clue where she heard that phrase (her invisible friend Sally, whence she plucked the F-word?), but danged if she didnâ€™t employ it with surgical precision. Also, at one point she staggered over to her Mamaâ€™s diaper bag, produced a packet of tissue, staggered back to me, and in a slightly less manic, slightly less two-tone guttural scream, allowed as to the fact that she needed â€œa blow,â€ which I administered to her ever-reddening nose. Once suitably wiped, she returned to the zigging and zagging and ranting and raving.

When she cycled through everything and had nothing more to demand verbally, she simply stood in the middle in the room and primally screamed.

And then, a longer than long fifteen minutes later, she had nothing left to scream, or perhaps nothing left with which to scream it. Over the course of the same sentence she blended from â€œI want Mama to come home RIGHT NOWâ€œ to a staccato, gasp-punctuated â€œI wa-ant (gasp) I wa-ant (gasp) I want bo-oks and milk (gasp) I want to cu-uddle.â€ At which point I left my post at the door and galvanized into action. Moments later we were all on the couch with A.A. Milne. A careful observer would find only the merest hint of the drama that led up to this placid scene, in the puffy-lidded, red-rimmed eyes on the girlchilld, and her especially tight tuck under my arm.

Poor lilâ€™ critter. Face to face (yet again) with what the Buddha called â€œviparinama-dukkhaâ€ â€“ suffering due to change (the Wikipedia entry on dukkha includes a bit on viparinama-dukkha, which pretty much sums up the lilâ€™ monkeyâ€™s complaint: â€œ1. violated expectations; 2. the failure of happy moments to last.â€) And itâ€™s not an easy job, trying to figure out how to regulate your emotions — how to assume control of your so-called â€œexecutive functionsâ€ when you still canâ€™t even spell â€œexecutive,â€ or pick one out of a line-up. Sometimes the feelings just come too fast and furious for her to assume any control whatsoever, executive or otherwise. (I think of the Ashleigh Brilliant post card, with the quip: â€œI try to take one day at a time, but sometimes several days attack me at once.â€) Sometimes all the lilâ€™ monkey can do is spit her emotions rat-a-tat-tat around the room, or ram them into objects in a desperate, protracted attempt to make them to go away. She may think theyâ€™ll go away when she gets whatever thing she wanted (in the case of the COW the other week: for Mama not to leave and go to work). But since Baba is not quite so nutty as to concede a thing in these moments, even if she could, the lilâ€™ monkey gets her emotions to go away by simply burning through them all, â€˜til whatâ€™s left are the fumes they leave behind, and a feeble, wet kitten-ish desire to cuddle and drink some milk and read some books. A cuddle with milk nâ€™ books being, for her, the apogee of comfort.

My mother spoke to me often of â€œthe mauvaise quart dâ€™heure.â€ To her, it was that period of dread that would precede some worrisome event (Iâ€™ve seen it also described as the period of embarrassment or discomfort following a gaffe of some sort). She would tell me that if only I would just breathe, be patient, and persevere through those fifteen minutes of discomfort, I would find that they are transient. I would find that coping with the thing itself as it is happening is a very different project than dreading it. The more I observed this in action, the truer it seemed to be. Without knowing it my mom was in league with Buddhists, who point out that while suffering may well be an elemental part of life, we might consider resisting the temptation to suffer about the suffering. I’m working now on not dreading the next tantrum, which I hope might pass through in fifteen minutes. I figure this hurricane season will pass, too, eventually.

I’m banking on that for myself, that’s for sure. See, I too have a switch — labeled â€œthe menopauseâ€ — and it can flip faster than you can say Bobâ€™s Your Uncle. Critical mass is reached, a quorum of stressors, and SHAZAM! Itâ€™s meno-Baba. I donâ€™t like her one little bit (see illustration), and with the help of some bartered acupuncture and some low-budget Chinese herbs, I just may be able to give meno-Baba a decent shave, at least, if not reduce her to a proper size and keep her safely tucked away in my pocket. There next to my pint-sized meno-Baba will also have to be the shame that I feel after a menopausally-induced fit, knowing that in those moments I am role modeling anger management for our hurricane-season toddler. Anger management, that is, Ã  la the Incredible Hulk.

I can only hope thereâ€™s room enough in that pocket for forgiveness and compassion, too: from each of us, to each of us, in good time. Meanwhile, there will always be books and milk.