I received as meager consolation the sense of genuine arrival as a parent, as I watched myself nobly sacrifice my own joy in the best interests of the chlidren. Because their happiness and well-being is my own. The girlie, no longer feverish, went off to see the last Sing-Along Sound of Music screening with the parent she doesn’t have enough time with these days. Even though I’m one who has been muttering “High on a hill was a lonley goatherd” in my sleep for weeks. Ole dime-a-dozen, familiar as the wallpaper, primary caregiver Baba.

And alas, there was no leaving the little brudder behind with a babysitter. He simply couldn’t resist (a) getting the sister’s cold, and (b) topping her version of it — which featured fever, congestion, and sleeplessness — with that thing that only babies do so well, the cough-induced hurl. Hourly. It was a job fit for a parent. 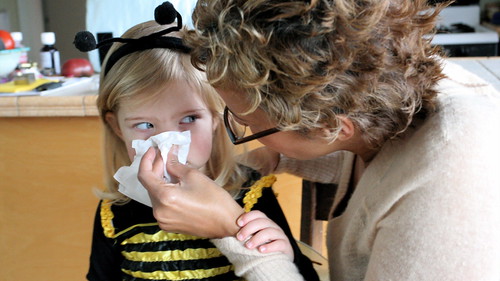 Above: When The Bee Stings gets her nose wiped by her lovey-dovey Auntie R, before forging out.

The beloved caved into my whimpering and took the camera along to help me see what kind of fun they got up to, which included a raucous and highly participatory theater filled with as many adults as kids, and a costume contest. Our intrepid first-time movie-goer was among the youngest there that day, and I believe the only one masquerading as a member of the insect order Hymenoptera. 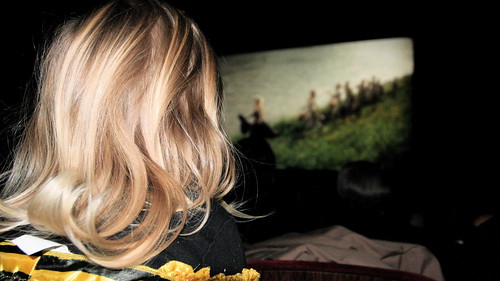 Of course the filmic highlights included “Doe, a Deer,” and kids traipsing around in damask curtains (pictured above). At least Maria, unlike Carol Burnett’s Scarlett O’Hara, had the good sense to remove the curtain rod before dressing the kids (yes, that link’s none other than the famed Gone With the Wind sketch — watch for three and a half minutes to get to the legendary moment, and be rewarded with prime time sketch comedy genius). 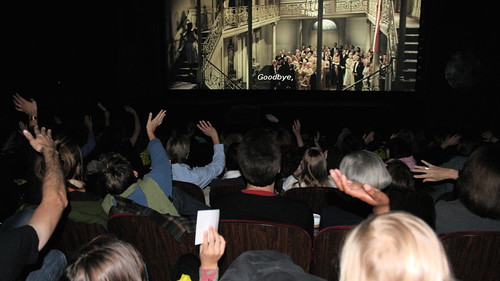 At the end of the first act, there were proper good-byes (pictured above). And one act was enough for our little bee, since the whole shebang was ever so stimulating, and the full bloom of her health was only just returning to her.

So long, farewell, I’ll watch the film next year. By then, I’m sure, it’s sure to still be dear.

7 thoughts on “What’s sadder than missing the Sound of Music once?”