A short holiday note to say that on Veteran’s Day (which it is here in the USA), I lament, as do so many, that anyone is ever a veteran of a war, and I take a long, deep breath in sober contemplation of all who are. And I thank the dieties that my own Pops, who weathered WWII (pronounced dubya dubya two) watched a torpedo shoot underneath his LST as he was landing on Normandy Beach that notorious June day, 1944. A lucky break for my dad, but not for anyone on the neighboring ship it went on to hit, a ship which carried many whose daughters do not sit today in front of computer screens writing about their good fortune.

I have no first-hand knowledge of the fact that war is hell, but I belive it, and hope both my children stay as ignorant as I am in this regard. Would that all could be. 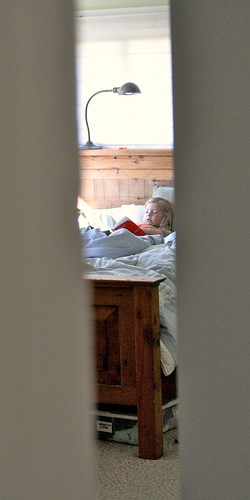 It is impossible to segue from war to children, though of course vast numbers of children die in wars; they are doing so today. But this week also marks the beginning of Children’s Book Week, and I would be doing multiple generations of biblophilic ancestors a disservice if I didn’t pass along the intel.

Some months ago we got The Librarian of Basra, but frankly the images of the burning buildings were a bit much for the lil’ monkey. So it sits on the shelf, waiting.

Meanwhile, the girlie reads up a storm. Yesterday she spent no less than an hour and a half (had to be that much) sitting and “reading” books from the beloved’s nightstand. I kept peeking in on her and suggesting that when she was ready, I’d be only too glad to take her to the playground. But she would decline, and return to leafing the pages and reciting aloud from her imagination.

“I’m reading,” she would say. Which she was.

There’ll be no stopping her when she finally puts letter together with letter and stumbles upon words. It’s a hop-skip-and-a-jump from there to sentences, which mean only two things: Woolf, and Didion. Okay, maybe more than two even.

At any rate. It won’t be long before she learns for herself that the pen is mightier than the sword. Or at least it ought to be.

[Here’s a link to the Iraq Coalition Casualty Count, and Iraq Veterans Against the War. After you’ve sobered yourself with a look at the Wikipedia page on ongoing conflicts worldwide, console yourself with this look at grassroots peace builders world-wide, thanks to Insight on Conflict.]

3 thoughts on “Don’t know about the lions, but this lamb is reading”