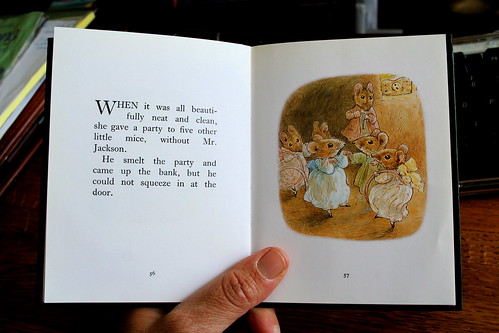 The beloved has a spate of evening rehearsals during the upcoming month or so, and I’ve called in the reinforcements, which for the most part consists of a phalanx of chums I’ve seen far too little of since we got with child #2. It’s not like I couldn’t hack it, managing the dinner/bath/bedtime routine with the two be-diapered kids simultaneously. It’s like my hacking it would also entail my hacking other things, too, due to Behavioral Complications stemming from the M-word.

In due time I’ll regale you (and embarass myself) with jolly tales about what the M-word stands for, and what it can do. But let’s just say that it rhymes with “den of paws,” and it came a hair earlier than expected, and IT IS NO PICNIC, people. (Here, wanna hint?)

But so. One of my phalanx of chums was over, rocking the little guy to sleep, whilst I indulged the lil’ monkey in our evening book-fest. Needless to say, I couldn’t resist playing to the new audience member, and so I had been dotting the narrative with colorful sotto voce additions to entertain us olsters. Alright, also I do this to keep the lil’ monkey on her toes. Did it as a teacher, too, with middle school and high school-aged students. The kid or two who caught the under-the-breath witty aside got special love from me. You know, higher grades, lighter homework assignments, things of this nature.

But so. We were nearing the harmonious end of Beatrix Potter’s The Tale of Mrs. Tittlemouse. Our protagonist was throwing a party for her mouse homies after she’d spent a fortnight tidying up her digs (I don’t want to spoil too much of the plot, but I will say that the mess had something to do with one Mr. Jackson, a frog, who tended to erupt with “Tiddly widdly!” whenever other words failed him).

The lil’ monkey was noting how pretty the dresses were on all the little mice. Baba couldn’t help herself, and muttered something or another to the peanut gallery. Might have been along the lines of, “Yes, quite, if dresses suit your fancy. Others of us might find that frock coat rather fetching.”

The peanut gallery generously chuckled, as she had throughout the Potter book-fest (we’d devoured Mrs. Tiggywinkle before we’d gotten to Mrs. Tittlemouse). Then the lil’ monkey smiled showed us what she was made of. She pointed to the little pennywhistle-playing mousie in the spiffy frock coat, giggled, and said, “That’s you, Baba!”

8 thoughts on “That’s *Mister* Tittlemouse to you”