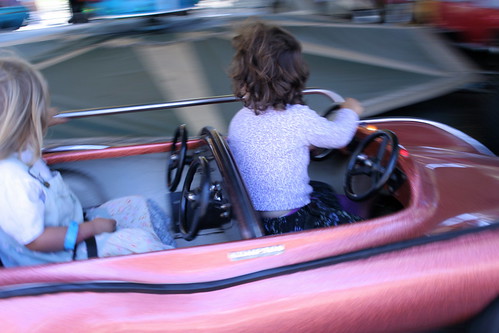 Which is to say, most of the household attention has been paid to the turning three of a certain someone, plus the matter of that two-going-on-three-year-old beginning (and staying a whole morning at!) preschool.

So much to facilitate, so little time to write about it. Ch-ch-ch-changes. That longer rumination will continue to season on the back burner; meanwhile I’ll offer up a few “tapas” to tide us both over.

â€¢ Mama and Baby Brudder were out of town for almost a week for an out-of-state singing gig Mama had. During their long absence, the girlie and I had dutifully filled each day with either fun or extendo-family or both. The day before the Mama returned, the lil’ monkey and I spent a blissfully lazy Sunday of communion with the special cousins and their parents, also known as my dear old friends and their daughters. (Huh?)

At one point I was talking to my chums about how excited I was to bake the kiddle’s birthday cake. Or some precious thing along these lines. I allowed as to the fact that this might make me more “demi-butch” than butch. To which they replied, “Anyone who uses the term ‘demi,’ rather than ‘hemi,’ is definitely not butch.” D’oh! Nailed!

â€¢ When I dropped the lil’ monkey off at preschool the next day for her first full day there, everything went suspiciously smoothly: she leaned against the director as she read a book, revelled in the sand box, delighted in “pushing me out the door” (yeah, we read the preschool parent playbook). Our two previous partial days had worked according to plan, thought I!

I was humming to myself as I rode back home, marvelling at the dazzling combination of our girlie’s fortitude and our parental brilliance. But it’s a good thing I’m not a speedy writer. I could have dashed off a smug little bulletin and posted it. And then I’d have had to redact it all. Because only ten minutes after I returned home, I got the call. Seems the transition from the sand box to snack time was a hair bumpy. Later, she told me, “The reason that I was upset, was that I didn’t understand about the snack time. I thought it was lunch time, but it was snack time.” Yeah, I thought, that throws me too, sweetie.

â€¢ We went to pick up Mama and Baby Brudder and Gramma at the airport later that day. We were more than ready to have our brood be whole again. When they finally emerged into the meet n’ greet spot in the airport, I set down the lil’ monkey and let her run to Mama. Gramma, pushing the lil’ peanut in a stroller, filled to the brim with loving tears as she watched her daughter break into a trot, squat down, and scoop up the girlie who had rocketed toward her calling out “Mama!” Recollection of her own homecomings to her children? Bittersweetness at the transition of Mama from one generation to the next? (How old were they when her own children last ran like that to her? Will any of us ever be able to mark it when it happens, the last unchecked moment of exuberant, pure, unselfconscious, mama-dependent glee?)

â€¢ Our girlie’s next day at school was her birthday, and of course Baba chanelled her own ma and baked and iced twenty little strawberry cupcakes. On the phone later, I told my sister I should be congratulated for showing enormous restraint, since I considered, but did not glaze the names of all the little kids on the cupcakes in a transparent ploy to endear them to my daughter. Was this overcompensation? Like, “Please love my daughter, please! Please befriend her! Don’t hold it against her that (a) she has two moms, and (b) one of them considers Hugh Grant her stylistic role model!” My sister assured me that every parent feels this way, and that what’s more, our girlie is a sweetie pie who will make friends just fine. I comforted myself that I could eventually ease off the campaign once she was elected Preschool Class President, or Homecoming Queen/King, or Representative to the Preschool Model U.N., or whatever things they have going on there. ‘Til then, though, I may have to keep the baked goods flowing. 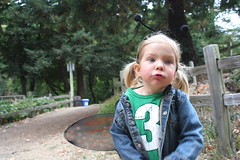 â€¢ The birthday was a three-year-old’s delight, complete with a pair of HER VERY OWN SCISSORS! (“I could cut with these all day!!”), a trip to Little Farm, a dance in the butterfly garden there with birthday wings, a visit to the pottery studio to pick up the birthday teacup Baba and she had decorated last week to her exact design specifications, a table full of family for dinner, a strawberry birthday cake, a gaggle of cousins bearing or bearing close witness to gifts, including a book about — you guessed it! — all kinds of animal poo!, and sloppy lovey thank you kisses all around.

â€¢ This morning, when the beloved took the girlie to preschool, the transfer went as smooth as her brother’s behind. She told the mama, “I’ll tell you when I want you to go. I might want to be with my friends.” Half rehearsal for the truth, half truth. Since, after the accumulation of two days there, she’s got just the flickering embers of a friendship or two.

After it seemed as if the girlie was suitably engaged with the play-dough, the beloved asked her whether she was ready to push Mama out the door. “Yeah!” said the monkey, and enthusiastically shoved her out, with Mama all the while squeezing in little endearments. “See you soon, sweetie! Have a good day!” Etc. She didn’t utter the words, but her little body said “Don’t let the door hit you on your way out, Mama!”