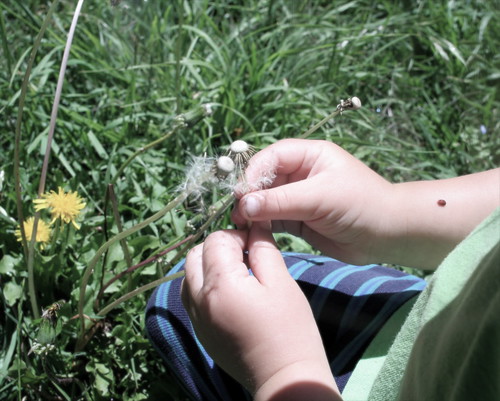 Itâ€™s Labor Day, which should inspire me to either celebrate the working peoples of the world, or the birthing peoples, or the work of the birthing peoples. But I think Barbara Ehrenreich and MomsRising would do a better job of that. And really Iâ€™m thinking more about the other implications of Labor Day: the end of summer, and the start of the school year(s). Our daughterâ€™s first day of pre-school is just around the corner, and with it come her first steps into community, a sort of gentle little public space, without us. We daily shrug off the typical pre-pre-school parental jitters, knowing that itâ€™s highly likely sheâ€™ll thrive there. Because of who she is and in spite of who we are. Also, because of who we are and in spite of who she is.

Sheâ€™s had a wee taste of community outside our family and friendship networks. She was in an at-home day care for a while, but she was very young then. Many of the other kids barely had a dozen vocabulary words at their disposal; the make-up of peopleâ€™s families seemed more or less lost on them. It helped, too, that the guy who ran it was a Latino Paul Lynde, more fey than our kidsâ€™ Grandpappy, which is an accomplishment. Now, more than a year later, she knows enough words to fake her way past an oral exit exam for elementary school. And she certainly knows about family.

Family and its public face was a big topic of conversation the other night with the nice lesbian family from across the street, with whom we shared a late summer BBQ dinner. They have a Baba too, a butch gal of an ilk such as myself, frequently eyeballed with suspicion if not ire in womenâ€™s restrooms, ainâ€™t worn a lick of galâ€™s clothes for decades; you know, the usual. Milling around the grill, we were talking about how our daughters related to us as the non-birth parent, and how we were beginning the task of managing our parental gender identity out and about in a public ill-prepared to comprehend us, for the most part, and quite certainly unprepared for anything other than two mutually exclusive gender options for parents. We were talking about the degrees to which we were beginning to sketch, for our toddler girls, our familiesâ€™ uniqueness relative to the world around us.

For our family’s part, weâ€™ve started with the proposition that she can handle an age-appropriate take on the truth from the get-go. And that in fact we are tying her shoelaces together if we lead her to believe that sheâ€™ll run across oodles and oodles of two-mom and two-dad families in the world outside our family and friendship networks. Or that many other people other than her or her best buddy across the street not only (a) have two women for parents, but (b) call one of them Baba rather than a variant of Mama.

Iâ€™ve been working up ways to characterize the degree of our familyâ€™s rarity. Iâ€™ve been figuring sheâ€™ll run into same-sex parents as frequently as sheâ€™ll run into lefties â€“ I hasten to say that in this case, I mean left-handed folks; there are more than enough left-wingers in our metropolitan region, saints be praised. Sheâ€™ll run into mannish lesbian parents, â€œthird sexâ€-kinda parents, a whole lot less often. She may meet as many people with albinism as sheâ€™ll meet Babas like me. Maybe. I dunno.

But weâ€™re not alone in our uniqueness, and she knows that, too. We also say that there are lots of ways to form and be in family, a truth just as consequential as our familyâ€™s being headed by two parents of the same sex. The â€œnormâ€ â€“ married heterosexual folks with kids they conceived and birthed, with no third party intervention â€“ stopped being the â€œnormâ€ a good ten years ago. The most recent census confirms that â€œalternativeâ€ family structures of various different ilks (grandparents or uncles and aunts raising kids, families â€œblendedâ€ with kids from previous marriages, adopted kids, assisted conception, LGBT-headed families, and so on) now make up more than half of American families. It ainâ€™t just us queer folk queering the do.*

And then, in the face of all this thoughtful preparation for her that weâ€™re as exotic as some clump of everglades orchids, come the blessed days when we manage to run into a whole rogue outcropping of hothouse flowers. Like yesterday. On a hike in one of our local regional parks, we ran across a lesbian friend walking her two dogs. Youâ€™d think there was always going to be a lesbian friend walking her dogs, when you went out in nature. Which, around these parts, is quite likely.

Later that same day, we supped on a fine burrito meal at one of the handful of lip-smackinâ€™ taquerias within a mile of our home. This one has an outdoor fountain where a hot girlie can splash her fingers around as her hot tired parents eat and watch. The lilâ€™ monkey made fast friends with another girl about her age. Fountain bonding. Each time the lilâ€™ monkey trotted back to us to tell us something else about her new friend, the beloved and I exchanged glances that were a combination of be-charmed and relieved. We have to know sheâ€™ll be okay on her own, and this was early intel. We prompted her with all sorts of ideas about things she could ask and tell the girl. Name. Whether going to school in fall. Name of new school. Things of this nature. It was all very delightful.

And then on the way out we saw a lesbian family. Or rather, they saw us. One of the gals was wily enough to use our youngest kids as a contrivance to be sure we paused and had the opportunity to drink each other in. â€œLook, itâ€™s a baby!â€ said the one lesbo mum to the wee sprout in her arms. I can never resist someone wanting to lap up our little Adonis, and it matters not whether the admirer is two or ninety-two. So I pulled my baseball hat from where Iâ€™d perched it, backwards, on the lilâ€™ peanutâ€™s tiny head, and paused. We stopped and exchanged niceties, vital statistics (ages of babies, pounds, etc.).

Then after much meaningful mutual smiling, we turned to be on our way. Their older child, a boy who looked to be a few years older than our lilâ€™ monkey, had a sweet, more-attentive-than-usual sort of look. I saw that flicker, and took it right off to be the flicker of recognition of another two-gal-headed family like his. I flashed him a special smile, and gave him a special good-bye wave, before fixing my baseball hat, catcher-style, back on my own head. Just as we were walking across the street, the fountain buddy and her crowd exited the taqueria with a flourish and much waving. â€œGood-bye, new friend!â€ we all of us called out, fluttering our arms enthusiastically.

As we were driving away, the lilâ€™ monkey was mulling something over.

The beloved and I stole a look at each other. Did she mean â€œyourâ€ as in just Mama, or â€œyourâ€ as in both Mama and Baba? And was it the lost social nicety that she regreted? Or was it that she was beginning to want to tell the story of our family?

â€œI should have told that girl your name.â€

Then the regret passed, along with the thought that it came in on, just as quickly as it had come.