“Let’s play ‘Family,'” says the lil’ monkey this afternoon. How can I say no? Also, how can I not use it as yet another opportunity to massage the concept, yet again? In situ? Under the guise of her initiative?

“When you play ‘Family,’ who is it that’s in the family?” I ask as coyly as I can manage. 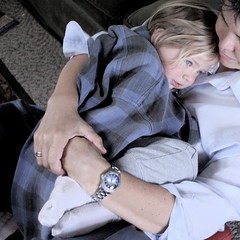 “So not two Mommies, or two Daddies, or a Mama and a Baba?”

“No, a Mommy and a Daddy.” She’s cheery, and of sound conviction.

I try to investigate just a weeee bit more. Without flooding the room with the stench of didacticism. Nothing spooks an unwitting brainwashing subject more than catching a flash of the propaganda in broad daylight.

“Why do you want there to be a Mommy and a Daddy?” I ask, with as cheery a tone as she’s had all along. Since I actually am cheery. And doing a good job of stuffing the worry down deep in my shorts pockets.

“Cause there are lots of people with Mommies and Daddies. Most people have Mommies and Daddies.” Can’t argue with that, especially when that’s what we’ve been telling her all along. Our line is, most people have a Mommy and a Daddy (we provide illustration from the copious supply of aunts and uncles around her). Some people have two Mommies or two Daddies (again, illustrations from friends she knows). And some people have a Mama and a Baba (e.g., her best chum across the street). From time to time, further elucidation is provided on what a Baba is, technically speaking: a kind of a parent part way between a Mama and a Papa. If you had to say it was more one thing or another, you’d go wtih a Baba being a kind of a Mama.

I know it can all sound convoluted, but god love me it’s the closest thing to the truth there is. Really. And we owe her the truth, period. All we can do is keep serving it up in bite-sized portions, every time she announces that she’s hungry for more again. And then stop serving when she’s obviously full. We take care to serve it up neither too spicy nor too rich, until she develops a more sophisticated palate. We do plenty of product-testing (picture us in the supermarket of her brain, with our sample portions on toothpicks, taking careful note of the wincing face or the smacked lip). Once, about a month or two ago, I even asked her: If she had to choose, what do I seem more like, a Mommy or a Daddy? Without deliberation, she chose the latter. How can I argue with her own perception? I winked as I said to her, “Yeah, I kinda think so too.”

This afternoon, our “Family” game is turning out to mostly be a thinly-veiled excuse for an interesting conversation, though I’m beginning to suspect it’s been she who has been steering it all along.

The lil’ monkey goes further. “Everybody that has a Baba wants their Babas to be Dads, right?” She looks at me very carefully following the question. I am the wily polygraph-cheater. I appear not to be just now stabbed in the heart with a crayon, or a little toy pony, or whatever. Though my pupils probably dialated.

“Well, not necessarily,” I manage. “Could be sometimes. But if you want me to pretend I’m a Dad, I’d be perfectly happy to.”

We’ve been doing gobs and gobs of family play lately. She’s just about three, and has been building up both curiosity and vocabulary about who’s in her family for at least half a year now, maybe more. She lists who’s who, upstairs (our nuclear unit) and downstairs (her cousins and aunt and uncle); she says our names and our relationship to her. In those recitations, she names me as her Baba, both a proper name and a generic. She’s also just about to go to preschool, where “Baba” isn’t generic for anything. Yet.

Just as literally millions* of LGBT families have before us, for months and months and months now we’ve been, as gracefully as possible, anticipating our daughter’s need to be able to articulate her family to new buddies. Or rather, little people whom we dearly hope will be her new buddies. Every time somebody refers to me as her mother in public (e.g., “Your mommy is so nice to have gotten you that nice Peterson’s Field Guide to Western Birds!”), I strike up a conversation about it. About how, in public, most people will see me and call me her mommy. Because Babas are rare. Like fairies. Kind of invisible, but not to everyone. Some people can pick them out. Otherwise, because they are female, they are going to be called mothers.

It seems a bit pretzel-y when you come at it from some angles. Also it all falls apart when the word count for any explanation to her exceeds, like, twenty-five. But from other angles, though, it’s really simple. Ultimately the proof is in our little pudding.

When I had managed to pull the crayon (or little toy pony, or whatever) out of my heart, I assayed one last question. “Now, if someone asked you what kind of family you had, what would you say?”

“I have a Mama and a Baba.” No equivocation.

“And what if they asked you what a Baba was?” I was expecting some kind of hesitation, but nope.

“A Baba is a kind of a Mommy and kind of a Daddy,” she pronounced. Then she paused. “Mostly it’s a kind of a Mama.” She looks up at me with a barely subdued beam of pride, a twinkle in her eye, and a smile.

Can’t argue with that.

* Between four and fourteen million children are being raised in LGBT households, according to the 2000 Census. This from the Family Pride Stats and Facts page. Comprehensive breakdown of the 2000 Census by the National Gay and Lesbian Task Force here.

4 thoughts on “Lose some, winsome”