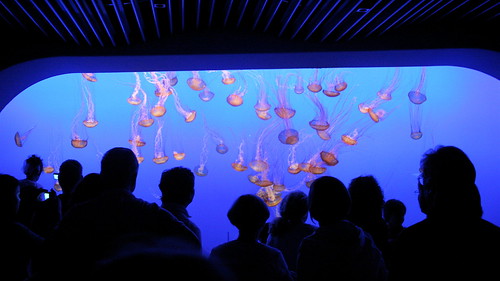 We spent a week with the beloved’s dear friend and her kids, all at this friend’s parents’ place in Carmel-By-The-Sea (yes, it’s everything you’d expect from a town with so many hyphens in its name). The kiddles spent most of the time romping around the house, the garden, or the beach (or watching those who were romp-capable do so, while gnawing on a Baba’s or a Mama’s finger). Great fun was had by all, not least of whom was the lil’ monkey, who ricocheted between replicating the every move of the bedazzling older gal (seven), or directing around the sweet and accomodating younger brother (three). In honor of the lead kid, we dubbed the week “Lucypalooza.” 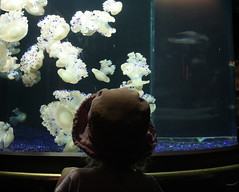 On our way home, our little quartet stopped in at the Monterey Bay Aquarium, where we’d been a whole year before, with this same brood. Of course we had to look at the jelly fish right away, the main exhibit that stuck in the monkey’s mind a whole year later. The displays in there are a showcase of lighting design, and even without mind-altering drugs or severe sleep deprivation, the jellyfish are mesmerizing. For better or for worse (depends on your tolerance of high production values/intrusive design), they pipe in spacey-groovy-eerie music, so you can reeeealy get it that these critters are cool. 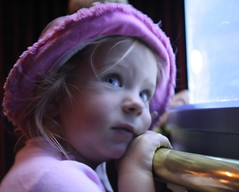 Of course, just as last year, I found myself a bit too buffetted by the crowds. And this time around, some of the show biz detailing at the Aquarium got to us. The most egregious example of which was the placement, in the freshwater sea otter tanks, of a large flat-screen display playing endlessly looped video of otters romping and frolicking. Just in case the real, live otters directly below the display wouldn’t be captivating enough. If your child doesn’t have a diced and sliced-up attention span before entering the freshwater otter exhibit, chances are s/he will upon departure (real? fake? real? fake? try to watch the real ones move randomly and singly while selected video hightlights of the whole bunch fly directly above the lumpy real ones!). We’ll be steering clear of the freshwater otter tanks in the future. If the lil’ monkey asks after them we may just have to tell her they went extinct.

Still and all, no amount of razmataz can sucessfully obscure the wonder of the living world. That’s what the lil’ monkey kept asking after. “I want to see more real animals,” she’d say, over and over again. Jacques Cousteau would be proud. Her baba sure was. 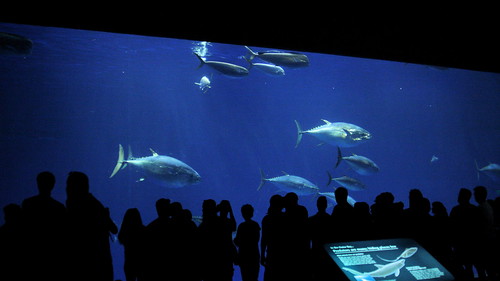