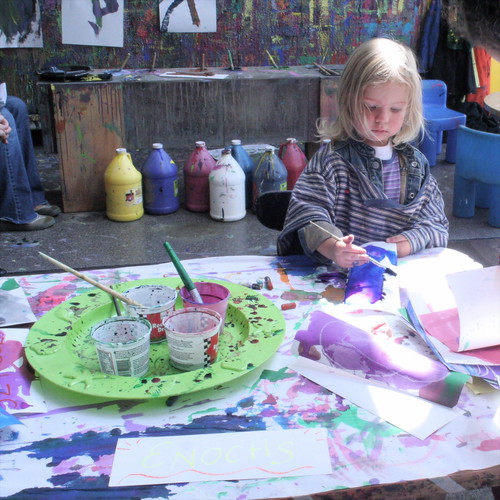 Not that I should complain. I quite enjoyed myself. In fact, I think it’s best to only go out on outings that one would be 3/4 willing to do even without kids. After all, if Baba’s not happy, nobody’s happy. The only valid complaint I could register on this excursion was that holding kiddle #2 kept me from pushing the little munchkins out of the way and getting busy myself.*

The highlight of the visit (other than watching the lil’ monkey totally absorbed in everything she did): soon after I arrived with both kiddles in tow, a woman there, with her own toddler + infant combo, pronounced that my kids looked exactly like me. “You can just tell,” she said.

Since she said this from across the room, atop the heads of various studio denizens, small and smaller, I elected not to call back her that they do look like me, in just the same way that my dog did.

I smiled to her from across the room, and nodded.

The lowlight of the visit: lil’ monkey went ballistic right before we needed to leave. Why go ballistic, you might ask? One answer, following the Toddler’s Creed, would simply be, “Why not?” (If you have custody of a toddler, and haven’t read this gem from Looky, Daddy!, you absolutely must.)

Another answer, perhaps not much more likely than “Why not?,” but at least more sane, is that she had only recently begun to work with some clay, and she wanted to take “a big lump” with her so she could continue the Camille Claudel impersonation at home. After I told her that all she could take home was an eensy weensy little bit of clay, she almost instantaneously set to sobbing, repeating the refrain, “A big lump of clay, I want a really big lump of clay.” And so on. Her sorrow was genuine: eyes positively brimming with tears, so much so that I was amazed she could see her way around the studio as she randomly zig-zagged with her lump, wailing.

She would have none of my gentle reasoning. Such as, if she were freaking out because she wanted to play with the clay at home, and she knew we didn’t have any, I’d actually be totally willing to get some on the way back, since I’ve always thought we should have a big lump of clay around the house. Aside from myself, of course.

But no. She had heard that you could take some clay home with you, from the kindly attendant gal. What the kindly attendant gal meant was, after you actually craft something with it, you can take the crafted product home. You can’t make off with, like, a hunk of raw clay the size of a paving stone. That you can barely hold up, your tiny wrist is so small.

We eventually struck a compromise, bringing home the amount of clay that the kindly attendant imagined the lil’ monkey might have used, had she actually crafted something on site. Such as for instance a dinner set for eight.

Upon our return home, the lil’ monkey conveyed her version of the afternoon to the beloved. She excitedly described that we had gone to the studio, how it was “all for children.”

We looked back at the girlie for signs of enduring trauma. Zip. All’s that was visible were smudges of paint and dried clay. If one half of the Toddler Creed is, “You never need a sane reason to freak out,” the other half is, “When the tears dry up, so will the angst.”

________________________________
*Think I put him down to take the picture above? Think again! I held the camera down at the hip, in the left hand, peering at the viewfinder from a distance, depressing the shutter release with the thumb. Really. Quipping to the kindly attendant gal: “Second child is the mother of invention.” To which she says, “No doubt.”