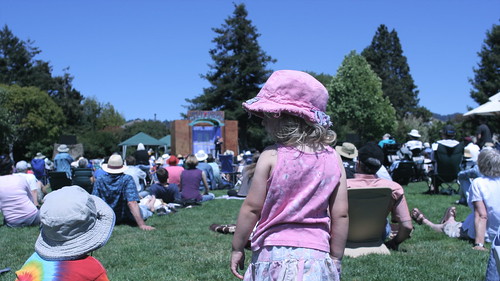 It was a jam-packed and fun-filled weekend. On Saturday the beloved and I celebrated Ten Years of Commitment with an all-day, kid-filled party, complete with revised! and updated! vows. I’m not sure what got me more misty-eyed: hearing what my life’s love had to say to me before a clutch of our dearest friends and extended family, or listening to her belt out French cafÃ© songs to accordion accompaniment.

If that wasn’t enough, on Sunday, we strolled to our neighborhood park to see this year’s San Francisco Mime Troupe show, Making A Killing. I love-love-love them on General Principle, but I also think this show is one of the best they’ve done in years (here’s their NorCal performance schedule, for you locals; run, do not walk, to whichever show you can make).

They are hep enough to have published a pithy two-and-a-half minute highlight of Making a Killing on YouTube, which I offer for your viewing pleasure below (particularly if you are out of performance range):

The Mime Troupe (“No, not THAT kind of mime”) has been making “socially relevant theater of the highest professional quality” for free, in-the-parks performance “before the broadest possible audience” since 1959. God love ’em, they’re still going, despite constant financial struggles (from their History page):

In the 1990’s, the rightwing attack on the NEA cost the SFMT most of its federal support and also decimated the national touring network, its other main source of income. The company now tours only a few weeks a year, and spends winters conducting theater workshops for at-risk teens.

After the show, they do a “curtain speech” in which they ask audience members to consider donating at least what they just spent on the last Hollywood blockbuster, if not their monthly lattÃ© budget or more. Cheap at twice the price, sez me. In a testament to the limping political commitment they find in the audience these days, they also provide a pep-talk about how one might, if one were inspired by their show, actually ACT to make social change. It’s a genuine pity they can no longer afford to take their shows on the road. I was struck with a wave of homesickness when I sighted their truck in South Minneapolis once in the early 1990s. Who’d-a thunk that was to have been akin to my having espied a Peregrine falcon on an urban high wire? 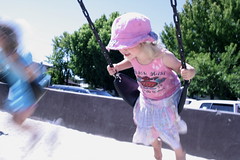 To my chagrin, our lil’ monkey had severely limited recall of this, her second SFMT show. When I later asked her what she remembered of it, she could only cite the Peak Experience she had when she wandered over to the nearby playground mid-performance.

“What I remember most is the biggirl swing,” she said, blithely unaware that she was born into a two-generation theater family, and one that harks from its radical wing, at that.

Her swing interlude was theatrical, though, on its own terms. While she was swinging, another girl appeared and began to wait her turn. When I suggested to the lil’ monkey that if she wanted, it might be nice to let the girl take a turn, she thought for just a moment, and then proceeded to dismount, mid-swing, with calamitous effect. I had to lunge to keep her from doing a face plant in the sand. Absolutely no embarassment from the wee novice. Just fixation to let the bigger girl have a ride. Later, when she was back in the saddle, she confided to me in a mature tone that “I don’t really like the other swings anymore.”

Who could dispute it? Her first ride on a biggirl swing, the one thing that could possibly trump a standout show on a sunny day from America’s only Tony award-winning guerilla theater troupe.