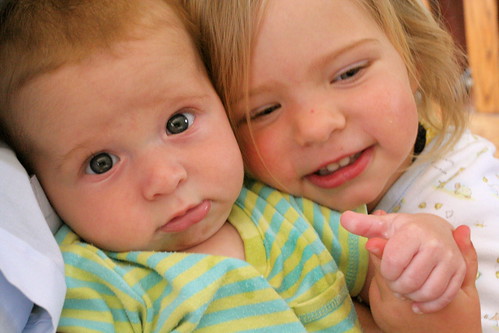 Sure, the addition of the second kid definitely represented an exponential, not arithmetic jump in parental labor. And the toddler + infant combo can be tremendously daunting at times, when there’s just one of us and the both of them are simultaneously at the apex of need, (toddler’s needs: 75% emotional; infant’s: 75% physical; both of them, at the pinnacle of their own special misery: 99% piercingly vocal). And after four months we’re still in the weeds; the improvement now is simply that we get clear views up out of them regularly, so we know it’s not all weeds for as far as the eye can see.

But it’s so clearly worth all the fatigue of these early months. Because apart from the phenomenal blessing that “me boy, me sweet boy” is, simply on his own — and that would be reason enough to slog through these weeds — it’s clear that they love the bejesus out of each other even now. And that, people, is a sight to behold. The lil’ peanut beams outrageously whenever his big sister approaches him, and just this morning I swear I thought the lil’ monkey was going to faint from an overdose of her own lovey dovey feelings. Really, she was swooning. I watched a two-and-a-half year old swoon. 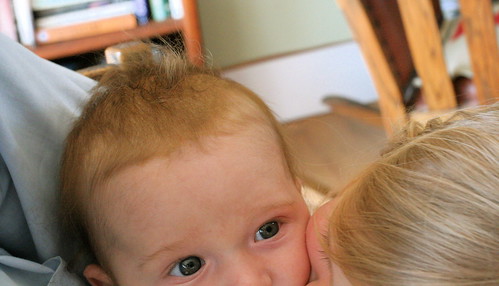