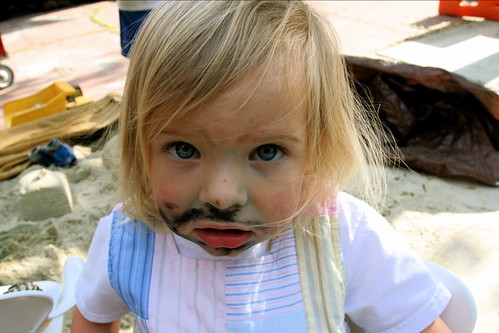 So I call her Punky Monkey a lot of the time. Any nickname is extremely time-dated, rapidly morphing into its inevitable and natural variants. So, Monkey quickly became Punky Monkey.

She claims to have applied this facial dÃ©cor all herself, but we’re going to have to ask her morning daycare provider gal to corroborate. Either way, it looks especially good with the pastel swirly gown she picked out this morning.

Reminds me of Klimt’s Danae, a cheap reproduction of which hangs on our bedroom wall (looks like this). I know most people would be distracted by Danae’s sensuous body position receiving (or fighting to resist? not in Klimt’s vision) the attentions of Zeus, who is deftly impregnating her whilst impersonating a shower of gold.

Me, I could take or leave the shower of gold. I’m drawn to the manly chin line and the five o’clock shadow. (Really. It’s hard to see in a small reproduction, but I swear, there they are.) Does this mean our girlie has a future as a Drag King? Hope springs eternal. But I think it’s a little too early to tell.