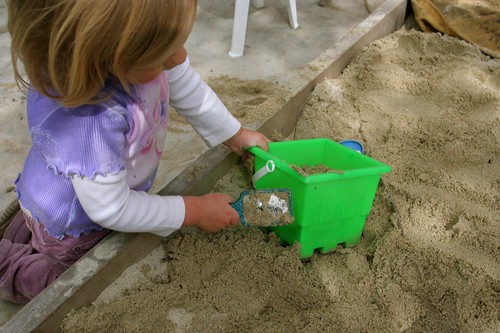 The careful observer will note: that’s no shovel, that’s a mirror. Atsa my monkey!

The other day my sisterâ€™s son and I joined my daughter out in her office, a place known to others simply as the backyard sandbox. She received us with barely a nod, so engaged was she in her work filling and emptying her bucket. And then filling it again. I like to think this sort of engagement helps prepare her for productive work in other offices in the future.

My nephew and I found ourselves some space and set to a game he often played with his brother and his mom. In it, the one party buries an object â€” any object â€” in the sand whilst the other party covers her/his eyes. Then when all’s ready, the burier sits back and watches the other party dig around and try to find the hidden treasure. It is the burying party’s option to provide the digging party a hint, as needed.

We went through several rounds, in which my nephew tipped me off as to the general quadrant in which I might find the object. In rapid succession, pretty much on the second or third shovelful of sand, I exhumed first a truck, then a car, then a motorcycle. Finally my nephew got tough and buried a small plastic figurine and described an exceedingly wide swath of territory in which it might be found.

“Ah, my dear boy,” I said to him as I continued to fruitlessly paw away at the sand, “you touch on the most central organizing concept of life, the paradox.” A quiet moment ensued. “Do you know what a paradox is?”

He shook his head “Nope,” but his eyes did not glaze over. He’s an exceedingly wise nine year-old, after all, and the prospect of an abstract conversation with his garrulous auntie daunted him not a jot. Bear in mind, though, that for the past two years — two years exactly, this past weekend — he has been grappling with about the hardest dilemma any nine-year old can grapple with: the death of his older brother. More than most kids his age, he is aware that making sense of complicated abstract dilemmas is food. It is not optional.

Not that there is any sense to be made of his brother’s death, of course. It is an event far, far outside sense. But some kind of route across the ocean of grief needs to be plotted, even if only on General Principle. Even on journeys one has no expectation of completing — or perhaps especially on such journeys — one needs a map, and the stars, and a keen sense of how to make use of the tiniest of breezes. My nephew is Odysseus, exhausted from the Trojan war, and Ithaca is a long, long ways off.

He picked up a twig and began to absently draw swirls in the surface of the sand.

Again he shakes his head.

He’s still with me. Maybe a little distracted by the fact that I’ve slowed down the work on the little Olduvai Gorge I’ve created in the sandbox. But he’s a gracious person, and doesn’t say anything.

“A paradox is when two things that contradict each other exist side by side. The one thing should make the other thing not exist, or not be true anymore, but it doesn’t. It just sits there. They both sit there. So like your wanting me to find the figurine, on the one hand, yet not wanting me to: that’s a paradox. The both things are equally true. Or a rollercoaster ride, which can be scary and fun at the same time.”

He nods, rollercoaster connoisseur that he is.

Perhaps not surprisingly, I am relentless in my commitment to speak our collective grief about his brother. Even about grieving generally. He simply can’t feel isolated by its dominating presence in his young life. So quite naturally I hop directly to the other obvious paradoxes lapping up at the edge of the sandbox.

“Another paradox is how much joy I feel that your baby cousin was just born, and yet at the same time how much sadness I feel now that Maxie died. Or when she was born,” and I gesture to the lil’ monkey, who may or may not have just unearthed a kitty poo. A Baba has got to keep her priorities straight, so I tell myself it’s a piece of tanbark and return to the tutorial. “I was so happy, and yet just six weeks later Kay died, so I was terribly sad, too. I feel those things both at the same time. I’m happy you and your mom are visiting; having you near makes me happy. And yet at the same time I still feel so so sad that your brother isn’t here with us too.”

I think of, but keep to myself the paradox I see in his mother’s face as she holds her infant nephew. The first boy child in the family after her son’s death. The lil’ peanut smiles up at his auntie, and his love darts fly directly into her soft center, both salt and salve to the wound there. Elation and sorrow live in the exact same place.

My nephew looks up from his designs in the sand. “But sometimes you can feel the good feelings, and the bad ones go away. Don’t you think?” Bless his optimism. Bless the impulse in him that seeks it out.

Into my head pops the last lines of The Cat in the Hat, which I’ve just re-read to the lil’ monkey the night before. After the day of debauchery, and just before the mother returns, the little kid narrator challenges the reader to examine her own honesty. So:

Should I tell him about it?
Now, what Should I do?
Well…
What would YOU do
If your nephew asked YOU?