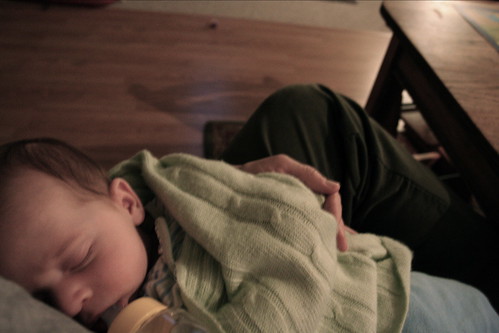 A David Hockney-esque collage of vignettes, some forty-eight hours out.

At the dinner table, cradling my son in the crook of my left arm, looking half the time at his latch on the bottle of expressed Mama milk, half the time at the vast gulf of emptiness just beyond his head, the spot where Maxi would be, should be, even at her sickest, begging for food.

Blinking away the natural result of that realization, remembering the quiet, expedient management of uncontainable grief, a lesson learned thirteen years ago after the death of my mother.

Turning my attention back to the little peanut, who goes through a wincing pain from his vaccinations earlier in the day, and then smiles broadly at me from behind the nipple when his eyes meet mine.

The fey Grampy is in town — in fact, cooked this meal, and is at the table — and so I indulge in a little audience-appropriate cultural reference, and begin to sing, in a bad pseudo Cherman accent, in my worst approximation of Marlene Dietrich: “Fallink in luff again… vat am I to do/ kaaaan’t help it.”Â Because, as I look into the little peanut’s eyes, it’s true, I am falling in love again, despite the empty gulf just behind him.

Grampy then recounts a little about an octogenarian Marlene in Vegas, videos of which performances he has watched (but of course). “Her face pushed back up to here” (he gestures with palms clapped onto face, pulling back, approximating a scary plastic surgery job), “but she was still tremendous.” Then he launches into a rendition of her sung-spoken version of “Where Have All The Flowers Gone?” which she evidently performed in all seriousness. I ask him, did he think she was in any way being campy about it? “There is no irony in Vegas,” he says, and then tucks back into the stir-fry.

Later, I am changing the son’s diaper while the beloved is putting the daughter to bed and Grampy is cleaning the dinner dishes. The beloved comes in to say that the daughter has asked after me, and I manage the Herculean task of waiting a few minutes, so as to enable her to (possibly) fall asleep before I get there. Herculean because I am directly requested some 35% of the time, as compared to Mama’s 65%. Not that I’m counting.

I scoot into her room just in time to find her in that sweet liminal state between asleep and awake. Her evening lullabies are still playing on the CD player: Jane Siberry’s Hush. Long ago we succumbed to a sleep consultant (money well spent, people!) who advised, among many other very specific suggestions, that we play the same music every night when she went to sleep. This would (a) help establish a Pavlovian association with the onset of sleep, and (b) enable us to parse out time with her when she got verbal and we began to need to bargain with her (“I’ll stay, sweetie-pie, but only ’til the end of the next song.” “Okaaaaaaay.”) When it came to choosing the music, we weren’t about to torture ourselves with Barney or Elmo. So we used something we could bear hearing over and over. If you go for this nighttime practice, I can recommend this Jane Siberry album with confidence, since it has held up to hundreds, if not thousands of repetitions as of this writing.

What’s playing, as I enter the darkened room? “Pontchartrain,” a song that always takes me back to September 2005. I would hear it, over and over again at night, when we were first trying to ease the lil’ monkey into a regular sleep pattern. I would hear it, and all I could do was think of a childhood memory of the long, low drive across that lake, its steely water, the Mississippi Delta into which it flows, and then my dear friends now living in New Orleans, and the images I saw and the scenes I read about that post-Katrina September, the most indelible of which was one of a mother, found in her attic, clutching a child whom she never let go of, not ever, and she had clung so tight that the rescue workers who found them days later were hard-pressed to separate the bodies from one another, long after their souls had left them.

It is with this image in my mind that I sit myself down on the edge of my daughter’s “biggirl” toddler bed, and stroke the strands of hair from her face. We live in the self-same world; the self-same nation, even, as that Ninth Ward mother and child. Irreconcilable. My daughter says a few nonsensical things to me, and then we settle into quiet, Jane serenading us. I leave my left hand beneath her face, and slowly, as she drifts to sleep, her head heavies, until by its weight I know she’s asleep.

Just two nights ago, this is how my dear, dear, I will never, ever know a sweeter being than her dog left her body: I was holding her from behind, and after the sedative went into her veins, she turned her head into my left hand, where it had been stroking her neck. Two old, familiar gestures, mine and hers. Moments later, by the weight of her head in the palm of my hand, I knew she was gone.

These juxtapositions might seem exceptional, but they’re not. They are perfectly ordinary, they are (to one degree or another) the bread and butter of everyone’s daily lives. They are why people are right about life, when they describe it thus: it is like licking honey off the edge of a knife.