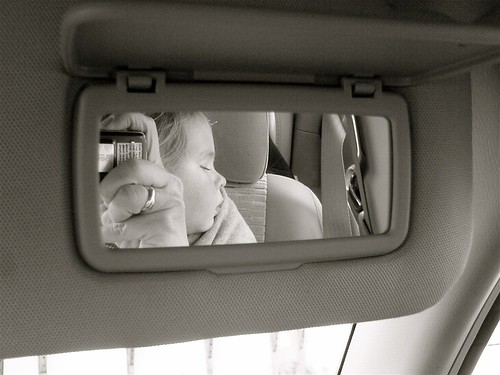 Lil’ monkey resting between miserable crying jags after she finally went Tilt! in front of the popsicle case at the store.

We are at our local eco-green organic free-range pharmacy, the lil’ monkey and I, and she has been plastered against the popsicle case for the better part of five solid minutes, during which time I have been gently establishing and re-establishing and re-re-establishing What’s Going To Happen, which is as follows: she will not be able to get a popsicle today, for several perfectly sensible reasons, a sucrose overdose at her cousin’s birthday party earlier that afternoon not least among them; instead what she can get will be the suitable alternative of a yogurt drink when we get back home to Mama.

“But I can get the popsicle,”  the wee critter says, for the gazillionth time.

I quietly re-assert What’s Going To Happen again, and note the added detail that we really do have to get home very soon; that Mama is waiting for us; that I’ll have to pick her up and carry her out of the store soon if she doesn’t decide to do so herself, simply as a practical solution to an obvious problem.

This would be an appropriate moment to note that I am severely loathe to use my superior size to force her body to do something I want it to do. I will take an extra ten, even (in dire circumstances) fifteen or twenty minutes of gentle persuasion, rather than resort to picking her up and moving her against her tiny will. Empathizing with whatever it is that might be driving her, and cultivating her intrinsic motivation — to leave the tub, to consent to having her diaper changed, what have you — is of supreme importance to me. This reverence for intrinsic motivation (the gift that keeps on giving) comes coupled with an equal distaste for extrinsic motivators, and is a direct product of what I’ve come to believe about teaching after about fifteen years of it. The philosophy could be summed up as: “Coerce or bribe a gal to fish and she eats for a day, work with a gal’s intrinsic desire and capacity to fish and she eats for a lifetime.”

Alfie Kohn has written about this in both educational and parenting spheres, and has put words to extant beliefs of mine regarding teaching, and extended them for me into the world of parenthood. I have used parts of Punished By Rewards in a pedagogy class, and read patchwork chapters of Unconditional Parenting. The beloved has read Unconditional Parenting from cover to cover, and we are both rabid acolytes. Thus far, things have worked. Also thus far, kid #1 was the sole apple of our eyes, and we had the time one has with just one kid and not two. Oh, and also before now she has been less than two-and-a-half years old.

Now, back to the free-range pharmacy. The lil’ monkey and I are catching our breath for the next round in our Battle Royal when a man and his daughter mosey up to the popsicle case. To my horror, they open it up, and he commences to engage her in a sweet conversation about which popsicle she’d like: one of these nice fruit ones? Blueberry? Strawberry? Or maybe she’d like the chocolate? Ooo, chocolate, Daddy, I’d like the chocolate one please, squeals the cute girlie, who is of course somewhere between two and four years older than my monkey, prime pace car age. Okay honey, here you go! says the accommodating Daddy.

I try to muffle the choking and gagging sound that is involuntarily escaping from me as they stroll by, the picture of father-daughter bliss, hand in hand.

I look back to see that my daughter has opened the case and is caressing the frozen ice particles that line its side, either because she can’t reach the popsicles and this is as close as she figures she’ll get, or because she has an innate sense that this quiet act of masochism will enhance the drama of the situation.

I should take another moment to note here that we’d already made it through the pharmacy and purchased what we’d needed, and had walked a few steps away from the check-out when she boomeranged back to the popsicle case. Something had triggered her memory, and she had recalled that once — yes, dadgum it, fool that I am — once before I did get her a popsicle from that case. It commenced to drip on everything imaginable before we got home, making an adhesive soup out of her digits, her clothes, her stroller, my fingers, etc. I’d vowed then we’d have a No Popsicle policy. But the mistake was made; the memory already indelible.

“I want a chocolate one!” she exclaims, her fingers picking up a pallid blue tinge as she continues to stroke the icy insides of the case. She is now more whine than voice. The weight of the heavy plastic bag of pharmacy goods is beginning to slowly cut off feeling in my fingertips.

“I’m sorry, sweetie. I’m sorry,” I say. “But this is the only way we’re ever going to leave the store before your third birthday. Which, I might add, could not come a moment too soon.”  I then carefully hoist her body (which instantly commences to flail), and try to ooze love and calm as I escort her from the popsicle case toward the exit.

“Please don’t carry me!” she cries, and I take the bait, putting her down. This is my first time at this, too, after all. As soon as her booties hit the floor she makes for the popsicle case again. I gently scoop her and resume the march toward the doors.

I studiously avoid eye contact with the patrons and cashiers who witness our perp walk out of the store. By now I have rolled her and tucked her under my arm, the better to keep a-holt of her, and she is writhing like a burlap sack of snakes.

“I — want — one — I — w- w- want — one I w- w- want — one” she wails, irrevocably moving into the sad, sad cycle of wail-gasp-wail-gasp. To drive the stake in further, she periodically repeats the “Please don’t carry me,” and I assure myself that what all the store patrons know or don’t know about what has preceeded this moment is of no consequence to my relationship with my daughter.

Once outside I situate us on the bench near the door, where I hope to review again what’s up, why we’re doing what we’re doing, what happy thing she has awaiting her. Then what party of two do you think exits the store and sits themselves down next to us on the bench? Yes: it is none other than the father-daughter popsicle team.

In the parking lot a woman eyes me with that Kidnapper? Or harried parent? question in her face.

“Two-and-a-half year-old big sister; two-and-a-half-week old little brother,” I say. I shrug and do that smirk-smile thing that’s the best one can do under the circumstances.

Inside the car I rock her back and forth in the front seat, where she continues the “I w- w- want one” wail-gasp cycle for who knows how long. At this point, time is irrelevant. We are outside time. She will be done when she’s done, and I will help her to feel safe ’til she’s done. She cries, I try to say as little as possible; I inwardly marvel that altough it is my “No” that is the immediate trigger for this outpouring, she still slumps into me and allows me to hug her and stroke her hair, seems even comforted by it. She tires and falls asleep, then wakes and cries again.

As she cycles through feeling-fatigue, feeling-fatigue, I think about how many times she will come up against this potent mixture that she is experiencing in its full force for the first time just today. Impotence and despair. Chapter one in an infinite series of lessons that wishing does not make it so, no matter how razor-sharp or ocean-deep the wish. I think about the deaths — one, two, three — that help form the container for my love and appreciation for her.

I think of the first one, the one that taught me so much, the death of my mother, a little over a dozen years ago. How we were pressed up against the icy truth that she was dying and there was nothing, nothing any of us could do about it but keep her as comfortable as possible, and then brace for impact.

I think about one night late, during the first year after my mother’s death, when I went into the quiet downstairs of the house I was then living in, put on the stereo headphones, and sobbed through the entire forty minutes of Faurés Requiem. The grief was accute, but the tears, at least that night, were not endless. When the requiem was done, I was done. For then.

In the car, eventually my daughter relaxes into normal breathing. Finally, when I ask her whether she’s ready to go home to Mama now, she says, “Okaaay.” As I buckle her into her seat, she says, “I wanted a chocolate popsicle,” but now sweetly, with the angst detached and floating somewhere nearby, gently drifting up up and away, like a forgotten helium balloon. For now.