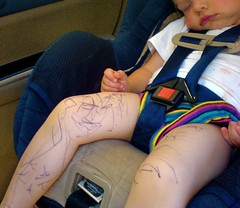 Today I succumbed to one of the more insidious of middle class child management techniques, the Strap The Little Weasel In The Car And Squander Fossil Fuel — And Our Children’s Ozone Layer — In A Hail Mary Attempt To Get Her/Him To Sleep.

I was wracked with inner torment that I was indeed doing this, but yesterday’s eco-friendly Walk Around The Neighborhood In A Stroller technique fell flat, and we are in the midst of implementing Nightime Sleep Regime v.7.0 , so both she and I needed to actually get rest today. I pledge to myself and the ozone layer that I won’t do this often, but it will take some discipline, since of course it did work, just like the beloved said it would.

I had gotten us on a loop, up and back and up and back again, along a quiet stretch of freeway which would afford me occasional glimpses of the sailboat-dotted San Francisco Bay. I put on Philip Glass’ opera La Belle et la Bête, my soporific soundtrack du choix. Yes, Phillip Glass, whose music is, much like cilantro or tamarind, something people rarely feel neutral about. You love it or you hate it.

I used to hate it, but that could be because once, long ago, during a miserable break-up (and what break-up isn’t?, one must pause to ask), I smoked a bunch of weed and went by myself to see Koyaanisqatsi, something that only a maudlin, obsessive, twenty-something year-old would do under the circumstances. It put me off Mr. Glass’ music for over a decade.

But a year ago in the fall, my beloved got to share one of the title roles in a staged version of the opera (the role of Belle, that is), so I had the opportunity to revisit him all the spring before when she was learning the music. The hitch is, while I no longer associate his music with a dank New England movie theater and the gloomy late-night walk back from it, I now associate it with what was happening a year ago last spring. Which was the final leg of my family’s collective journey directly into the mouth of hell, as my nephew neared the end of his pitched, nine-month, losing battle against brain and spinal cord cancer.

More about that over time, in measured amounts. Our making space in our hearts and minds for the fact of Erik’s death will take a life’s work; for my sister and her surviving son and her husband, I suspect several lifetimes’ worth. For now, I’ll just speak to the haunting, inky beauty of the score that was a sometime accompaniment for me through that surreal, soul-testing time.

My beloved and I put the music on in the guest room we stayed in at my sister’s house during the last months of the fight. Our daughter was just an infant. Nights she slept in a wee bassinet, when we were up and about doing whatever it was that was needed at the time. To help lull her to sleep, we would put on Glass’ La Belle et la Bête. On an endless loop. Which of course, for Glass’ music, is barely noticable. Countless iterations later, when we finally came in to sleep ourselves, we would turn off the CD and bring her into the bed with us. Taking in her sweet, moist, infant scent, we’d be struck breathless by the starkness of the contrast.

This afternoon in the car, as “Le Diner” was playing — it begins with the tolling of a bell, signifying the dinner hour, when Belle first encounters La Bête — I thought of that time.* I thought of Erik’s fight against a force we refused to believe was inevitable; of the fact that now, whenever I pick up our daughter’s sleeping body and carry her to her bed, I always flash on images of my sister picking up Erik and transferring him from bed to wheelchair to bed, in that last month. I think of the enormous criss-crossing that marked our daughter’s entry into the world: six months after her birth, the nearly-sudden death of my nephew, a boy who would have been her pole star, the oldest in her generation, my sister’s first-born child.

I always watch our daughter, as she sleeps, with exquisite gratitude for her continued existence. When she fights the rip tide pull of her drowsiness, I have compassion. I remember a period in my early adolescence when I was terribly afraid of the same transition. I wondered, Where does my spirit go, when I sleep? And how do I know if it will ever come back?

* Later addition: if you can ignore the visuals on the website (sorry, I haven’t got the doo-dads to embed the clip drectly), this 30 second clip of the song picks up where La Bête says to Belle, Don’t be afraid, and she says back, I’m not afraid (and so on).

1 thought on “Miles to go before she sleeps”