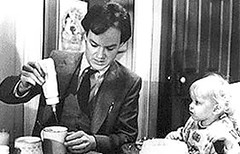 Mr. Keaton in his breakout role.

A week ago I left full time, 8-5 employment, and began to bob into the sea of fiscal indeterminacy. Scary-painful like pulling off a BandAid all at once. But the payoffs, in the realm of parental connection, have been immediate and profound and I will do all I can to preserve them.

The girlie got that faraway look in her eye while she was processing this information. A moment or two passed. Then she plunged straight into my chest and hung on tight like a baby monkey ready for a fast haul through the jungle.

That was Monday, my first real Mr. Mom day. Out strolling through downtown, I saw two friends who are fellow Mr. Moms, but in different ways. Oneâ€™s a man, a burly, refrigerator-shaped man who was a full-time contractor but now works a sporting goods retail job half-time so he can be home with the kids more. The otherâ€™s a full-time working butch mom, like I just was. He was doing errands, she was on a coffee break from work. I felt all hail-fellow-well-met with them, and with every damn person I saw that morning. Two gals, a stroller, some spare time, and some sunshine.

Itâ€™s a new day, and a new night, too: last night, for the first time in her 20 months here, the lil’ monkey called out for Baba. The beloved takes the night shifts and I do the early mornings. Around 2AM, the beloved went in to the girlie’s cries, figuring they were for Mama, which they always have been. Countless times, when she has needed the rest, Iâ€™ve gone in, only to be rebuffed with â€œNo; Mama!â€ But last night, just a week into my 50/50 parenthood, it was me the girlie wanted. When she discerned who it was that had come to comfort her, for the first time ever she declared to her Mama, â€œNo; Baba!â€ After a bunch of confirmation that she indeed knew what she wanted, and wasnâ€™t mispronouncing â€œMama,â€ I went in.